Without my EU citizenship, I stand to lose a substantial chunk of my world. My ability to travel, work and take part in 27 other countries becomes diminished. The ability for nationals of those countries to come here and be part of my society.

As that world shrinks, it shrinks from the edges and thus is far less noticeable for those who don’t walk there.

I was the same – particularly after I left the laser industry and took a substantial pay cut to move into politics.

But a little over a year ago, I met someone. We fell in love. We’ve bought a house together. We’ve adopted two adorable kittens. She became the centre of my world and, thus, so has the impact of Brexit. 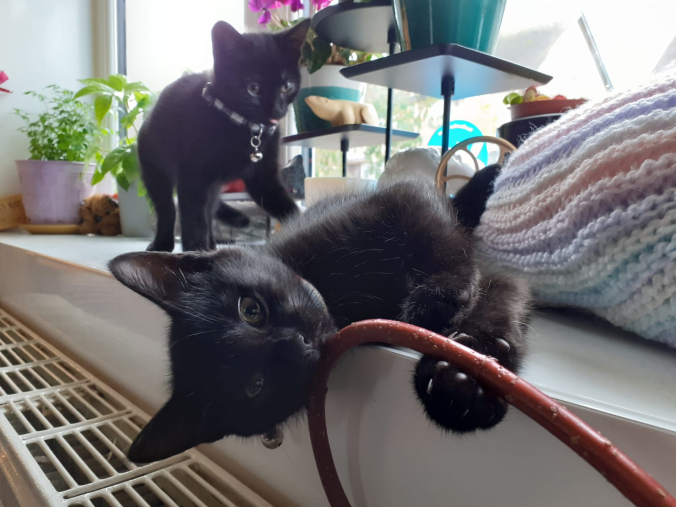 Independence: It’s for the kittens.

She is an EU national and her position in the UK is not secure because of Brexit. UK Citizenship is not an option for many reasons – including that she doesn’t want to become a citizen of a nation that is treating her like this but also because for her dual-nationality will be difficult and giving up her EU citizenship as well just seems like a bad deal.

Settled Status is an undesirable option because it represents a diminished of the rights she has right now and which allowed her to come to the UK.  It is an undesirable option because it requires her to sign over biometric data to the Home Office and the indefinite license to give away or sell that data to whomever they like without her knowledge or further consent and without any way of finding out who they’ve given it to. This opens her up to a lifetime of potential ID fraud or persecution due to the government simply losing or deleting her. Even Facebook treats our data better than this.

Yes, in any other field, this would be a massive breach of GDPR, but conveniently the Home Office is exempt from those protections.

We’re told that the data will be safe but others have been told that before. The Windrush Scandal says it all.

Another reason given is that some want to wait and see if there will be any changes in policy before the deadline (or if the deadline itself will move).

This will have particular resonance in Scotland where the government has been more verbally welcoming of migrants – albeit even to the point of making promises which may be difficult to keep – and there is, somewhere on the horizon, the possibility of an escape from the Brexit mess altogether. Independence.

Back during the 2014 referendum, most EU citizens either didn’t vote – believing that it wasn’t their fight or their place to meddle in Scottish affairs – or they voted No having been assured by Better Together that this would mean Scotland staying within the EU and thus protecting their rights.

This has changed dramatically since then with many polls now showing that EU nationals – whose right to vote in an independence referendum was stripped from them by Brexit but has been returned to them by the recent Referendums Bill – are now much more in favour of independence.

Polls have never been stronger but they are not yet showing an overwhelming margin for us and nor are they everything. We have our leverage and our strengths but we need to be willing to use them.

Tomorrow, the First Minister will finally reveal what she thinks are the next steps for the independence campaign. Her stated position up till now is still that a second referendum will happen in 2020. Despite refusal from Westminster, despite evidence that there has been much planning for it and despite the extremely tight timescales – tomorrow’s speech, no matter its contents, should have been given two years ago.

I would love to be proven wrong but as I type this – a mere 24 hours from Brexit – I think that we’re going to see the independence campaign pushed beyond the 2021 Scottish election horizon. If it is, we have to realise that that doesn’t mean a referendum in 2021. The elections in March may not result in a pro-independence majority – in which case we’re done. If they do, then even if a referendum pathway is opened (bearing in mind that Westminster’s stated position is now that no-one alive in 2014 should see another referendum) then it’s still going to take nine months or more to prepare. That pushes us to 2022 or beyond (we also have to remember that losing a referendum is likely to be a career-ending prospect for the FM and many members of cabinet so there will be a temptation to hold off until towards the end of the Parliamentary session).

Some may be able to wait that long. Many can’t. Many activists are tired now – even those very, very few of us who have managed to turn their activism into a paid job. Many have already left the country. Many will do so if independence gets pushed back much further.

You’re not going to like what I’m about to say but I may be one of them.

I don’t say that lightly. I love living where I’m living. I have very firm roots here (I have lived in four houses in my lifetime – all within the same village). If I had the fortitude to immigrate to a strange land as my partner has done then I would have done it by now. (Fun fact, 50% of Germans die within 25 km of their birthplace.)

But Brexit has forced us to evaluate her options. Settled Status is hugely discriminatory and drastically curtains her rights. UK Citizenship isn’t an option. Folk often ask if she’d be more secure if we were married. To that, the answer is that no, not here under the Hostile Environment – but it might help me in Europe.

So if her situation in the UK becomes untenable or too tenuous then we might be forced to leave. I don’t want it to happen and I’ll certainly fight like hell to avoid it but the risk is there and we have to be prepared.

Leave a Light On

So tomorrow is Brexit and I can’t say that I’m looking forward to the sunlit uplands we’ve been assured will be there. Tomorrow will be a day of reflection for me, for millions of others. For everyone who is about to lose their EU citizenship. For everyone who has already suffered hardship, fear and discrimination because of the UK’s blind leap towards populist nationalism.

I’m going to be at the Scottish Parliament tomorrow evening to mark the moment that Brexit finally hits us. There, at the ponds outside the Parliament, my partner Ellen will be installing an artwork to commemorate the event. We don’t just want Europe to leave a light on for Scotland, we want to bring the light of Europe back to Scotland after the UK walks away from it. I’m told that there will be many hundreds of us there to see it and if you want to come along, to have a shoulder to lean on when the time comes or to offer one to someone who needs it then please join us from 22:30. I hope I’ll see you there. Then we can take our collective next steps together. The night is dark and getting darker but if we all carry our own lights with us, we can drive it back. Independence is within our grasp.

4 thoughts on “Leave a Light On For EU”