“Facts are stubborn things, but statistics are pliable.” – Mark Twain

There’s no day that’s guaranteed to set the heather alight amongst Scottish political social media sects like the release day of the annual Government Expenditure and Revenue Scotland report – also known as GERS.

I want to make one thing clear up front. No serious commentator now suggests that GERS can be used as is as a projection of the finances of an independent Scotland. My 2016 paper “Beyond GERS” shows some of the changes that would need to be made for this to be the case. But as a set of accounts for Scotland, the region of the UK, I’m content to use GERS as it is. Maybe improvements can and should still be made, but this is true for all statistical publications and the team behind the report do the best they can within their remit.

So what does this year’s publication tell us about Scotland, the region?

It shows a deeply divided, deeply unequal UK that is failing to serve all of its people.

Scotland’s notional deficit, though smaller than previous years, is much higher than the UK’s and there’s a very strong case to be made that says that this is due not to the poor performance of the devolved government as some would claim but due to the increasing concentration of economic activity in London and the South East. The UK is, by a vast margin, the most regionally unequal country in the EU. 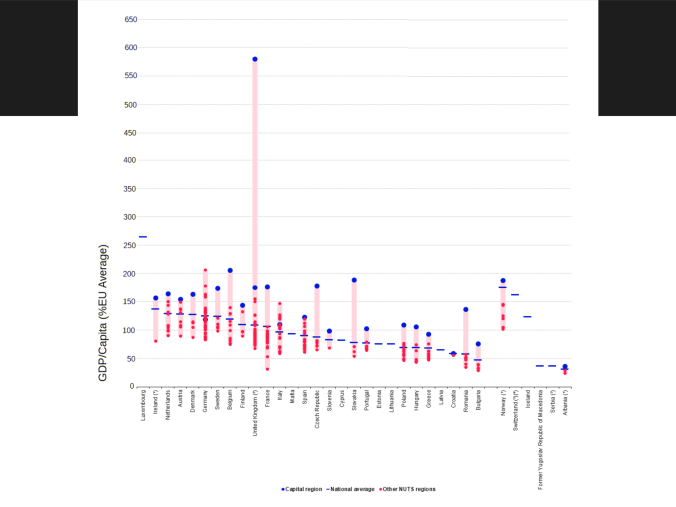 Evidence for this has been shown directly in recent reports which estimate “GERS-like” statistics for each of the UK regions and show that only London and the SE are “surplus regions” of the UK. All other regions are in deficit – some much more deeply than Scotland is.

We also see a concentration of people towards that economic activity. Whilst Scotland’s population is growing, it is growing a lot more slowly than the UK as a whole. Scotland’s “share” of population is declining. This has a significant impact on revenue and expenditure lines which are allocated to Scotland based on that percentage share. 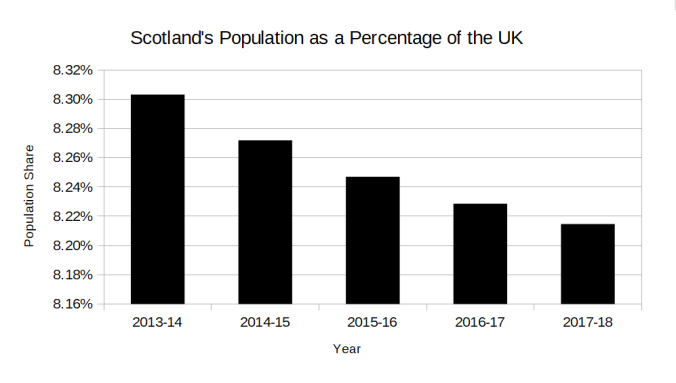 To show the impact of economic inequality using GERS, we can look at the notional per capita share of tax revenue in Scotland compared to the UK. Scotland’s 8.2% of the UK’s population produces, for instance, 9.2% of the UK’s non-domestic rates and 9.7% of the UK’s alcohol duties but Scotland only brings in 6.9% of the UK’s income tax, 7.0% of corporation tax and 5.9% of the UK’s inheritance tax. High income and wealth is concentrated elsewhere. Interestingly, Scotland contributes about 8.1% of the UK’s VAT which suggests that the very rich might have a lot of wealth and income, but they’re not spending it at a significantly higher rate than those of us in the “real” economy. There’s a lesson in there.

To show the impact of all of this, we could recalculate Scotland’s revenue “as-if” each tax brought in a population share of the whole of the UK. If we do this, we find that Scotland’s accounts bring in £2.8 billion less than would be expected if the UK’s economic activity was equally spread – this figure has risen sharply in the past few years. 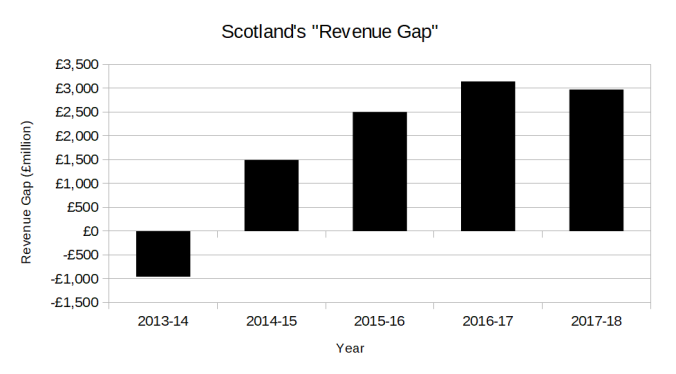 Some will claim that this is a good thing. That this is “pooling and sharing” in action. But, again, the UK is the least equal country in the EU and that spread is growing. It is not a healthy country that “pools” all of its economy into its capital (along with the investment and infrastructure spending that encourages even more pooling) and then “shares” handouts to the regions left without that investment. It’s an outright poisonous political culture that tells those regions that they should be happy with their handouts.

The whole obsession with GERS and deficits is a problem in itself. The goal of “Austerity” in the UK has transferred billions of pounds of spending from the public sector onto the shoulders of the private sector. Where the government used to provide services for you, now you need to pay for them. This may mean putting the bills on your credit card. In effect, a public sector deficit is YOUR surplus.

With this in mind, it’s no wonder that economic growth is flat across the UK. Businesses can’t invest, the government won’t and the public barely have enough money to pay their rent, their gas bills, childcare and the cost of their commute – never mind go to the shops for anything but the bare essentials.

Scotland deserves a healthier debate about finances and fiscal policy. Common Weal will be publishing a paper this week talking about precisely this. Instead of focusing on GDP and “growth” – which cannot be “sustainable” on a finite planet – we want to focus instead on the metrics that actually matter to the people of Scotland. Scotland should be measuring its environmental impact, it should be measuring levels of inequality and it should be measuring the wellbeing of the people of Scotland. It doesn’t matter how fast our economy is growing if the wealth is being captured by the already wealthy or is shipped overseas as fast as its earned. But we won’t get there by obsessing annually about GERS.

It’s time to grow beyond it.

Versions of this blog post appeared in The National and in CommonSpace.