“It seems obvious: the reason only a tiny percentage of new…buildings and retrofits aren’t green isn’t cost. It’s lack of ingenuity or knowledge of new construction techniques — architects and builders wed to the ‘same-old,’ lenders leery of anything unconventional.” – Sustainable Energy Africa

And with around 53% of all energy use in Scotland being used for heating and only a small fraction of it coming from renewable resources, it needs to be about more than throwing up any old building and passing the costs and consequences on to those who’ll have to live and work in them for decades to come.

Recently, I got the chance to experience a glimpse of what a better future might look like in the form of a tour around South Lanarkshire College’s ‘Aurora’ Low Carbon House.

This house, and the nearby college building associated with it, have been built to net zero carbon standards and are net energy generators rather than consumers. The total running costs for heating and lighting in a single year for the house come out to around £60 per year – and most of that was due to the fact the building is a teaching environment so the flow of people through the building is substantially higher than would be the case for a domestic dwelling.

How does it do it?

Well, the solar panels on the roof are the obvious start and this is something that more and more houses seem to be getting fitted these days. Slightly less obvious from the photo above will be the two dome shaped objects protruding from the roof.

These are light pipes which guide sunlight through reflective tubes down into places like hallways which often have limited provision for windows. These pipes therefore reduce the need to use artificial lighting during the day.

Thought was also given to the use of other resources like copper, the use of which was reduced by using wireless light switches which operate via piezoelectric membranes which mean they don’t even need a power source like a battery. This also means that you can stick the light switches anywhere in the room without having to re-wire everything and drill new holes in the wall.

On the heating side of things, the primary heat source for the house wasn’t gas or electric but a 250 metre deep geothermal borehole. Whilst a little less deep than the 2km borehole just announced for a new thermal plant in Kilmarnock, this borehole can still extract enough heat to warm the house during the winter and, because it is relatively cooler than a deep hole, can be used as a cold sink into which heat can be pumped to keep the occupants cool during the summer (this also replenishes the thermal source to be used again during the winter). 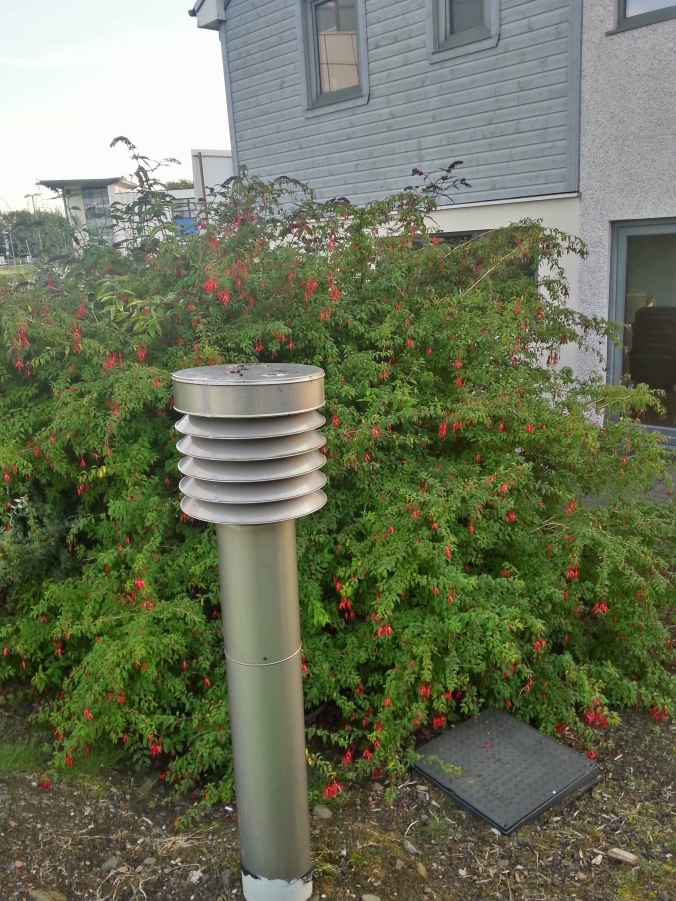 The geothermal borehole isn’t the silver column on the left, it’s under the unobtrusive manhole cover on the right. The column is the solution to one of the hardest problems within zero-carbon housing. How do you keep fresh air circulating without spending a lot of energy heating the cold air from outside and then dumping the heat out with the air later.

The solution here is to draw the air down the column and pass it underground at a depth of a couple of metres where the ground temperature is a constant 10C – even when there’s a metre of snow lying on top. This warmed air is passed into the house and through a heat exchanger with the system’s output pipe so that the air leaving the building transfers its heat to the air coming in. The air is allowed to ventilate but the energy is contained within the building. The best part of this particular system is that it all operates passively, without any energy hungry pumps or moving parts to break down. It’s all just thermodynamics and pressure.

The upshot of these additions to the building is a dwelling which far exceeds “normal” build quality and even far exceeds “low-carbon” regulations. It scores near-perfectly on all energy use and efficiency metrics.

This is all great, but doesn’t it cost a lot more?

Well…no, actually. The cost to build a zero-carbon house like turns out to be only about 2% more than a similarly sized house built to conventional standards. This is partially because the major component of house prices these days is due to speculation rather than materials but also because none of the technologies integrated into this house are particularly new or complicated. Many of them have few or no moving parts or run completely passively. A house like this would pay for itself in energy savings within a couple of years.

As the quote at the top says, much of what is possible with housing isn’t getting done simply due to no-one forcing the issue. All it would take is for the government to increase minimum standards to state that all new builds will be zero-carbon and, lo, they will be.

Of course, this is just one house and not all of the solutions here will be suitable for all buildings so whilst it is an exciting example, it merely scratches the surface of the possible but I want to give my very gracious thanks to South Lanarkshire College for giving me the opportunity to see the work you’ve begun here.

Common Weal will be holding a conference on the 7th of October to explore the vast topic of housing and materials for the future will certainly be a part of it. Leaders in the sector will be discussing topics from architecture, through community planning and land ownership and out to legal, tax and data issues. I hope some of you will come along. Tickets are on sale here.

4 thoughts on “Four Walls and a Roof”