The land so much needed by men was tilled by these people, who were on the verge of starvation, so that the corn might be sold abroad and the owners of the land might buy themselves hats and canes, and carriages and bronzes, etc.” – Leo Tolstoy

If you read the Scottish press last week, you might have seen some headlines promoting the spectacular success of transfers of land to community ownership over the devolution era. The amount of land now in community ownership in Scotland has “skyrocketed” in the past twenty-odd years. If you heard the Scottish Government’s own statements on the news, you’d be forgiven in thinking that the last round of land reform in 2016 was a huge success.

If you read the actual report, your enthusiasm might be more muted. The actual rate at which hectares of land have transferred to community ownership in Scotland has completely flatlined since the last round of land reform legislation in 2016 with over 99% of all community owned land being transferred before that act came into effect.

It is true that the number of community land projects have increased steadily since 2000, increasing by more than a factor of eight from 84 to 711. 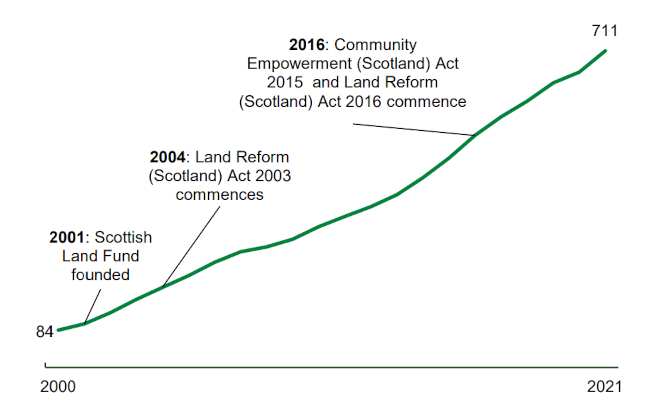 However, this has been a very steady increase and though the report marks important events in Scotland’s land reform journey it really does look like legislation such as the Land Reform (Scotland) Act 2003 and Land Reform (Scotland) Act 2016 had little effect on the number of these asset transfers. Indeed, the rate of new asset transfers grew at its fastest rate in the couple of years immediately before the 2015 and 2016 acts of legislation and then decreased markedly year-on-year between 2016 and 2020 until a spike in 2021 (I’m speculating but I wonder if Covid resulted in some transfers due to occur in 2020 were pushed to 2021 instead and this has contributed to that spike).

A similar picture emerges if we look at the number of groups which have formed at some point since 2020 to take on community land. It too has increased steadily since 2020 from 74 to 484 though the report notes that this does not mean that there are currently 484 extant community ownership groups in Scotland. A group that formed since 2000 then subsequently either wound up or disposed of its assets would still appear on this count. 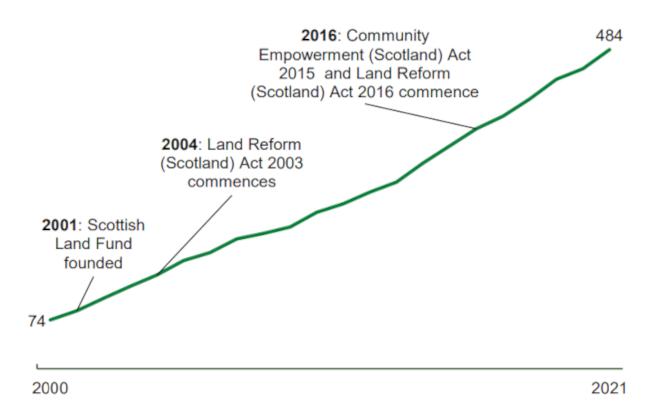 That the increase in community groups mirrors the number of community asset transfers makes sense as in many cases a community asset transfer will involve the creation of an entirely new group to facilitate the transfer and most groups will only own one or two transferred assets. This is likely to be true whether the asset in question is a community hall or an entire island. The pattern and timing of the creation of new groups follows a similar pattern to the number of transferred assets, with the peak coming just prior to the 2015/16 legislation and then a flattening off of the growth rate since. This should be considered particularly disappointing for Land Reform advocates as the 2015 Community Empowerment Act was specifically intended to enable communities to take on smaller chunks of land or buildings.

It is in the area of land acquired by communities that the true failure of Scottish land reform lies. The vast majority of the land transferred to Scottish communities since 2000 came by just a handful of large transfers in Na h-Eileanan Siar plus one in the Highlands. As noted earlier, less than 1% of land now held by communities has transferred since the 2016 Act came into effect (this figure includes the first half of the high profile Langholm Moor buyout in 2020 but not their successful expansion in 2022 – including those additional 2,150 hectares means that only around 2% of all community land has transferred since 2016). 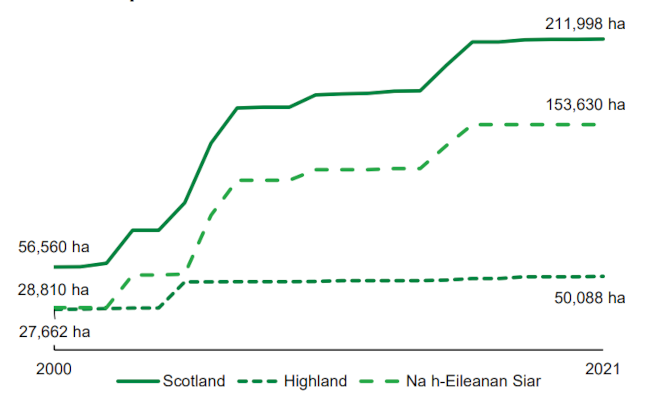 We also have to consider that the amount of land we’re talking about is still a tiny proportion of Scotland’s overall land area. According to the report, Scottish communities owned just shy of 212,000 hectares of land. This is approximately 2.7% of Scotland’s total land area. In comparison, Scotland’s two largest landowners, Anders Povlsen and the Duke of Buccleuch, own around 170,000 hectares between them. Add in Sigrid and Lisbet Rausing’s 40,500 hectare estate and we have four people who own roughly as much land as the entire combined area of all Scottish community-owned land. There is clearly a long, long way to go to achieve proper land reform in Scotland.

What seems to be happening now is that Scottish communities are simply being priced out of acquiring the land under their feet. Scottish land prices have been soaring in recent years – driven by lax regulation and increased demand for land with which to sell carbon credits and greenwash investment portfolios. The price of Scottish land has, on average, increased by 35% in the past decade or so in some areas have spiked at even faster rates. A few weeks ago, I wrote about the Tayvallich Estate in Argyll and how if the estate had gone up for sale just a few years ago, the “going rate” faced by the local community would have been half of what it is now.

What I believe may be happening in community ownership is that communities can no longer afford to pay the inflated rates demanded by estate owners even to buy substantial portions of those estates. Instead, communities are left to scrabble for what’s left over – maybe just enough to build a few houses or to save a community hall. For those meagre scraps wrapped us as a prize, communities have to go to just as much effort, stress, pain, paperwork, and uncertainty as they would have to do go through to buy the entire estate and almost as much fundraising – given that they probably still have to go thought rounds of grant/loan applications or crowdfunding.
As Lesley Riddoch pointed out in response to this report, communities are being left burned out as they “struggle to become experts in funding, governance, health and safety, housing, business and other complex systems”.

This simply cannot go on. The Scottish Government has to decide if the next round of land reform is going to be the last one – the one that finally breaks the hold of Scotland’s elite Lairds (“Green” or otherwise) and returns control of land to the people who actually live and work on it – or whether the next Land Reform Act will be as effective as the previous acts evidently haven’t been and we, the lobbyists and campaigners, have to go through all of this again in a few years. We need to decide collectively whose land we’re standing on, who gets to decide how it is used and how we go about changing centuries of inequity before “the markets” and those who defend them remove all hope of bringing Scotland into the 21st century and catching up to our European neighbours by shedding quasi-feudalism in favour of democratic control of what is, and always should have been, our land.

The Scottish Government’s consultation on land reform is open until October 30th so you still have time to get a response in. You can read our own response here and please feel free to steal ideas from it where you agree with them.

—
The charts and data used in this article are © Crown Copyright 2022, licensed under the Open Government Licence v3.0.

One thought on “Whose Land?”