“People who think about politics every day greatly overestimate how much time the average person spends thinking about politics” – A maxim that every political activist should pin on their wall. 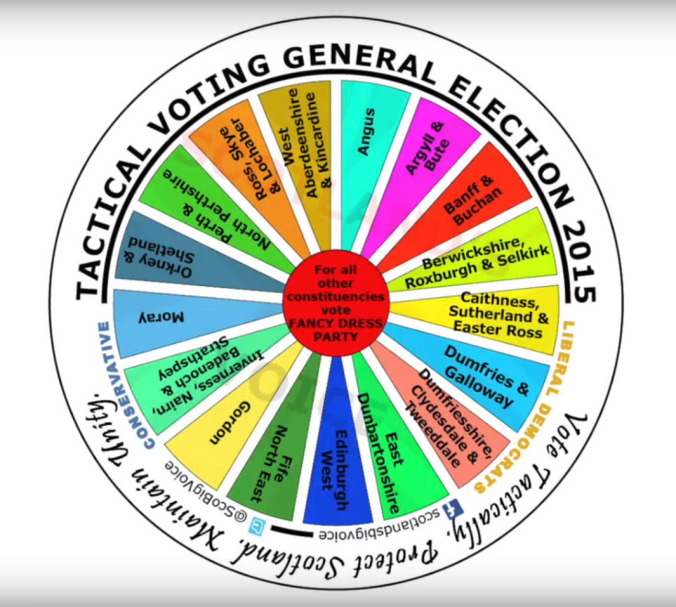 One of the many, many parodies of the #SNPOUT “Tactical Voting Wheel” seen in the run up to the 2015 UK General Election. Source: Youtube

We’re just about to cross into the single digit weeks remaining before the 2016 Holyrood elections and among a subset of the political campaigning community the inevitable debate over the “tactical vote” rumbles on. I, myself, have had a couple of fairly interesting conversations with a few such voters over the past couple of days which crystalised a few thoughts in my head about it.

The basic argument, boiled down, generally runs thus:
1) “Pro-independence voters cannot afford to vote anything other than SNP on the Regional vote lest the Constituency vote falters and the SNP do not gain a majority government based on it.”
2) “In any case, the Greens have not shown sufficient dedication to independence and have not absolutely confirmed that they would vote for another referendum bill.”
3) “I like the Greens and their policies. I’ll happily vote Green after independence.”

Doesn’t this sound a little like the arguments from some during the 2015 general election where people wanted to vote against their preference to try to achieve some goal?

From the perspective of the pro-independence tactical voter there seems to be four reasonably possible outcomes to the elections:

Now, to be fair, in the minds of most people I’ve spoken to option D) seems to be almost entirely discounted. Such is the strength of the SNP in the polls that even the leadership of Labour, the Conservatives and the Lib Dems don’t seem to be holding any pretentions of walking into Bute House later this year. For the purposes of this article I’ll also discount the possibility of another pro-independence party (i.e. The Greens, RISE or Solidarity) forming the government either by majority or in alliance with the SNP. I doubt we’ll be seeing that scenario either and, in any case, it’d be mathematically equivalent to options A), B) and C).

I can understand the concern faced. For the pro-independence voter, there is a great fear of a return to the 2007-2011 period of SNP minority government where the first attempt to pass a referendum bill was stymied by the lack of the ability to gain a majority of votes across the parliament. Whilst our voter would be quite sufficiently happy with result B), indeed may even prefer it over A) for its ability to push the ruling party where they actually want it to go they cannot risk nor contemplate result C) so must avoid it at all costs.

And so, in an attempt to justify not voting Green on the regional vote an attempt is made to ask if the Greens really are pro-independence. Independence isn’t, after all, something that the Greens are ideologically built upon. At our absolute core we are a party of the environment and of social justice. But this it is very simple to contrast that with a party like the SNP where independence is an ideological position and the environment and social justice is “merely” something they support. Despite our differences at times, I believe the SNP is indeed a party which cares about the environment, I certainly wouldn’t describe them as opposing environmentalism as a rule, the lack of an ideology certainly does not rule out support for a cause.

We also have to consider that, like the SNP, the Greens saw a massive Surge of members as a direct result of the independence referendum. More than 80% of the current membership joined at that time (myself included) and you’d be hard pressed to find any among them who campaigned or voted for No. Add to that the more than 80% of the pre-Surge membership which voted to campaign for Yes and you come up with a party which, based on this back-of-the-envelope calculation now has a membership which is greater than 95% pro-independence. It would be interesting indeed to compare that figure to the equivalent one for the SNP.

Consider also that all of the 1st and 2nd place list candidates of the Greens have confirmed their personal support for independence and you have a party which cannot have its ambitions doubted. We’ve even laid out, in some detail, the process by which we think Scotland can be shown to be ready for another referendum.

But, we haven’t said we’d unconditionally support another bill. Thus, so the argument goes, we constitute a “risk”.

Well, there’s a simple reason for that. We haven’t seen the bill and don’t know when it will be proposed. What we have said is that we don’t want to walk into another campaign with some of the unanswered questions which held us back last time still unanswered. Questions like currency, for example.

Our voter has to ask themselves; if the bill came up at a particularly disadvantageous time or if it was structured in such a way as they had serious concerns about it, would they still happily vote for it lest they be seen to “break” their promise?

Or to reverse the question in another way:
If the Greens were to say that they might propose an indyref bill in the next parliament; without knowing anything about the detail of said bill or the conditions under which it might take place; do you think the SNP would release a statement pledging unconditional support of that bill?

If our voter can conceive of even the possibility of the answer to those questions being No then they surely now can understand the unreasonable position being placed upon the Greens at this time.

Yes, the Greens are not pushing independence overtly as our number one priority for the next parliament but there’s a reason for that too. We recognise that whilst Scotland doesn’t have nearly as much power as we need to be a functioning country we do have at least some ability to do some of the things we need to do.

And if we do them, what happens? Very rapidly we build Scotland into a country walking a visibly different path from that of Westminster and the rest of the UK, we very rapidly show the people of Scotland that we can do the things they want to see and we very rapidly push against the limits of devolution and show what we can’t do. It is this which will push Scotland finally on the path to independence and will turn the “45%” into the 55% or even the 65%. We’re simply not content to go into a holding pattern where we hope that the polls slide just a little and the government is in a position to identify that 51% “winning” percentage and launch a snap vote (assuming it would be “allowed” to do so). We would much rather build a Scotland which confidently and loudly demands it and cannot have it denied.

That, for me, is why a Green vote is a vote for independence.

3 thoughts on “We Need To Talk About: The “Tactical Vote””