I don’t recall ever having been so conflicted about a vote than I am about the upcoming general election. This week’s interviews of Theresa May and Jeremy Corbyn did little to help with that.

As a brief review of the interviews themselves. I think Corbyn came across as quietly and surprisingly firm and upright. He had successfully anticipated the questions from both the audience and from Paxman and gave solid, if obviously rehearsed and briefed, answers. The perception of him in the press is that his policies are popular but his own personal factor is rather less so. Paxman attacked that weakness and went for the personal and tried to drag, sometimes fairly; sometimes unfairly, his already well aired skeletons out of their closets. Comparatively few questions from him were on policy. Corbyn probably came out as well as he could in the face of that.

May, on the other hand, showed why she’s been trying hard to run a Presidential campaign without actually appearing in front of people. Evasive and vague answers to questions and defenses of abysmal policies being literally laughed down. One question which particularly struck me was from the older gentleman who was very upset at the prospect of losing his house to pay for social care. Equally striking that when he was asked about it after the debate he admitted that while he was unhappy with the answer, he’d probably still vote for May. This is the calculation she’s made through this whole election campaign. She knows younger folk won’t vote for her (and – hopefully, from her POV, won’t vote at all) but she’s gambling that older voters won’t NOT vote for her (and will certainly turn out). If either or both of these assumptions turn out to be incorrect, she’ll be in for an abrupt surprise on June 9th. It seems incredible to say but my estimates of the impending Tory majority have dropped from 100+…to 6 points in some recent polls.

The whole debate was neatly summed up in a couple of tweets. 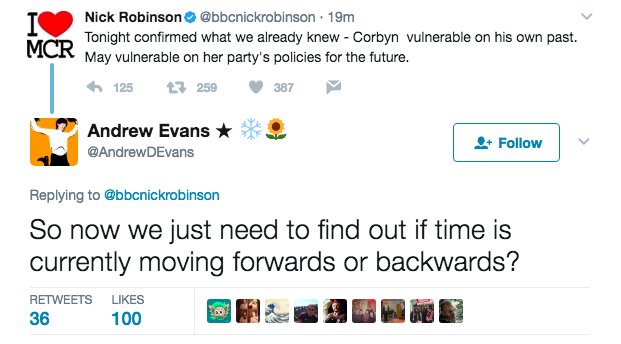 So why my conflict?

I don’t have a Green candidate to vote for in my constituency. Between cost, the inherent unfairness of FPTP with regard to smaller parties and a few other factors, we don’t have a candidate for the area and so my vote is up for grabs.

If I lived in England and couldn’t vote for the GPEW, it’d be a fair no-brainer. I’m actually excited by much of the Labour manifesto. Items like the program of nationalisation, the National Investment Bank, and their previous support for a scheme to look at a Universal Basic Income (though it hasn’t made it into the actual manifesto) are all policies that the Greens and Common Weal support and advocate for.

This isn’t to say that the manifesto is perfect. There have been compromises there to keep the ever recalcitrant PLP in line. Corbyn has all but admitted that he doesn’t like not being able to change the party stance on Trident and I certainly do not appreciate the manifesto’s stated opposition to Scottish independence. While reports more recently have somewhat softened that, i’d think it likely that he’d go into that negotiation from a stance of either offered Federalisation or finding some other way to try and “buy off” the nationalists rather than support a referendum.

But this isn’t the largest blocker towards my placing my vote in the Labour box. Quite frankly, I don’t trust Scottish Labour and Kezia Dugdale to support anything that Corbyn offers. Certainly not if opposing Corbyn helps them with their sole and over-riding goal of opposing the SNP at every possible avenue. I could believe that Corbyn would seek a coalition with the SNP to oust the Tories. I could equally believe that Dugdale would sabotage it to frustrate Sturgeon.

So my vote should go SNP then? Well…I can’t say I’m entirely impressed with their manifesto. There’s some good stuff in there – commitment to energy grid reform and the general pushback against Austerity is decent – but there’s a lot missing too. The SNP have been clearly outflanked on the National Investment Bank issue. They could have placed a commitment in there on that with the sweetener that they’d push for it in Scotland even if they couldn’t win power in Westminster. As a negative, I don’t like the continued push towards Carbon Capture – especially now that Scotland is free of coal power. As a technology, it’s looking more and more like another distraction from decarbonisation at best and an excuse to develop technology for ever more oil extraction at worst.  The lack of push on corporation tax beyond “opposition to further cuts” is also disappointing.

This last concern brings me to another point. I’m struggling to see the balance between the overall promises to end Austerity and the commitment to “balancing the budget” within the next five years. When asked directly at their manifesto launch about whether these promises were costed, Nicola Sturgeon didn’t give a particularly straight answer. I think the party is still caught in the trap of believing that government deficit spending is a “bad thing” and that we can just grow our way to economic “success”. There are some very good reasons to believe that this economic model is badly flawed.

Overall, this is clearly a manifesto built for a party which knows it can’t win any more seats than it already has and is trying to avoid losing too many. It’s also clearly a manifesto written without much intent of being implemented. The party rhetoric has consistently been one of assuming a Tory majority in which Scotland’s MPs would be ignored.

Away from the national campaign and down to the local I’ve been having a look at who is standing in my own constituency. It’s currently an SNP seat with the Tories in a very distant second. Even if the Tories pick up every single non-SNP voter, they’d still be shy some 7,000 votes. This probably explains why, a week and a half out from the elections, I haven’t seen a single piece of campaign literature from anyone and why my choice of candidates have been…let’s say “less than stellar”. We have the incumbent MP (whom I do like and respect). The Lib Dems and UKIP are both running one of their recently failed council election candidates and, rather more seriously, the Tories and Labour are both running one of their recently ELECTED councilors. I can’t help but think that they’re not taking this election particularly seriously.

So that’s my dilemma. In terms of manifestos, I’m probably most attracted to Labour’s but their opposition to independence and my lack of faith in Scottish Labour’s commitment to their own party is a serious concern. Whilst I’m not quite so enthused by the SNP promises and they look more like a list of nice things than a complete vision of a country, I can more easily believe that they’d work towards them given the chance and that, at heart, they will be thinking of Scotland when making inevitable compromises.

12 thoughts on “My Democratic Dilemma”