A year ago today, Common Weal published “Within Our Grasp” – a policy paper describing an escalating pressure campaign designed to compel the UK Government to either sanction a Section 30 order for a second independence referendum or to compel them to accept the results of an unsanctioned referendum or other pathway to a democratic mandate for independence.

We published this because while there was at the time a growing call for discussions around routes to independence that didn’t rest simply on asking UKGov for another Section 30 after they said No the last time, we recognised that while discussion of various reasonable alternative routes to showing that democratic mandate were important (and I later wrote about those alternatives on this blog), the weakness of all of them was that they all relied on either the sanction or acceptance of Boris Johnson either to start the process or to come to the negotiating table afterwards and to recognise Scotland’s independence.

This is unlikely to happen until it is more costly for Johnson to refuse that acceptance than it will be to accede to it. This is true regardless of the route taken.

As a case in point, refusing a Section 30 order right now is barely costly at all. The worst it will cause him is a bad headline in The National (a newspaper not exactly well disposed to him anyway) and maybe – maybe – it might drive the Tory vote in Scotland a bit lower as the small but significant percentage of pro-independence Conservative voters decide to look elsewhere in the May elections. It wouldn’t hurt Johnson’s Majority in the Commons. It might even gain him some polling points either in Scotland or in the rest of the UK as his voting base might appreciate him “Talking Tough to the Scotch”.

And so in our paper, we laid out a proposal for an organised non-party group designed to front the independence campaign and to identify when and how to escalate the pressure on the UK Government. In another blog post, I outlined some of the possibilities for actions that could be taken by certain sectors of Scottish society (especially by MPs in the House of Commons). In a sense, the actions themselves aren’t too important. What’s important is how they are used. Each one must increase Johnson’s “pain” when it comes to governing Scotland or continuing to refuse the demands of the independence movement. And each one must come with a clear signal that further refusal shall result in more “pain” next time.

Our paper obviously wasn’t adopted as Government strategy last year. Not many weeks after it was published, all work by the Government on independence was paused due to the Covid pandemic (although even before Covid reached Scotland we had seen the signs and, indeed, we had been told privately by folk within the Government that the then plan of an Autumn 2020 referendum was looking increasingly unlikely). Party strategy simplified down to “We’ll ask for another Section 30 order and we won’t entertain the possibility that Johnson will say No”. Indeed, for several months anyone who tried to bring up alternative strategies was shouted down until the party finally decided to declare a National Assembly where such a discussion would take place (the Assembly sits tomorrow).

Even in the face of a legal challenge to try to clarify the UK’s Constitutional position on an unsanctioned advisory indyref (which finally reached the courts this week), the Scottish Government position remained – even to the point of arguing in the aforementioned court case that that this was all just a hypothetical question. 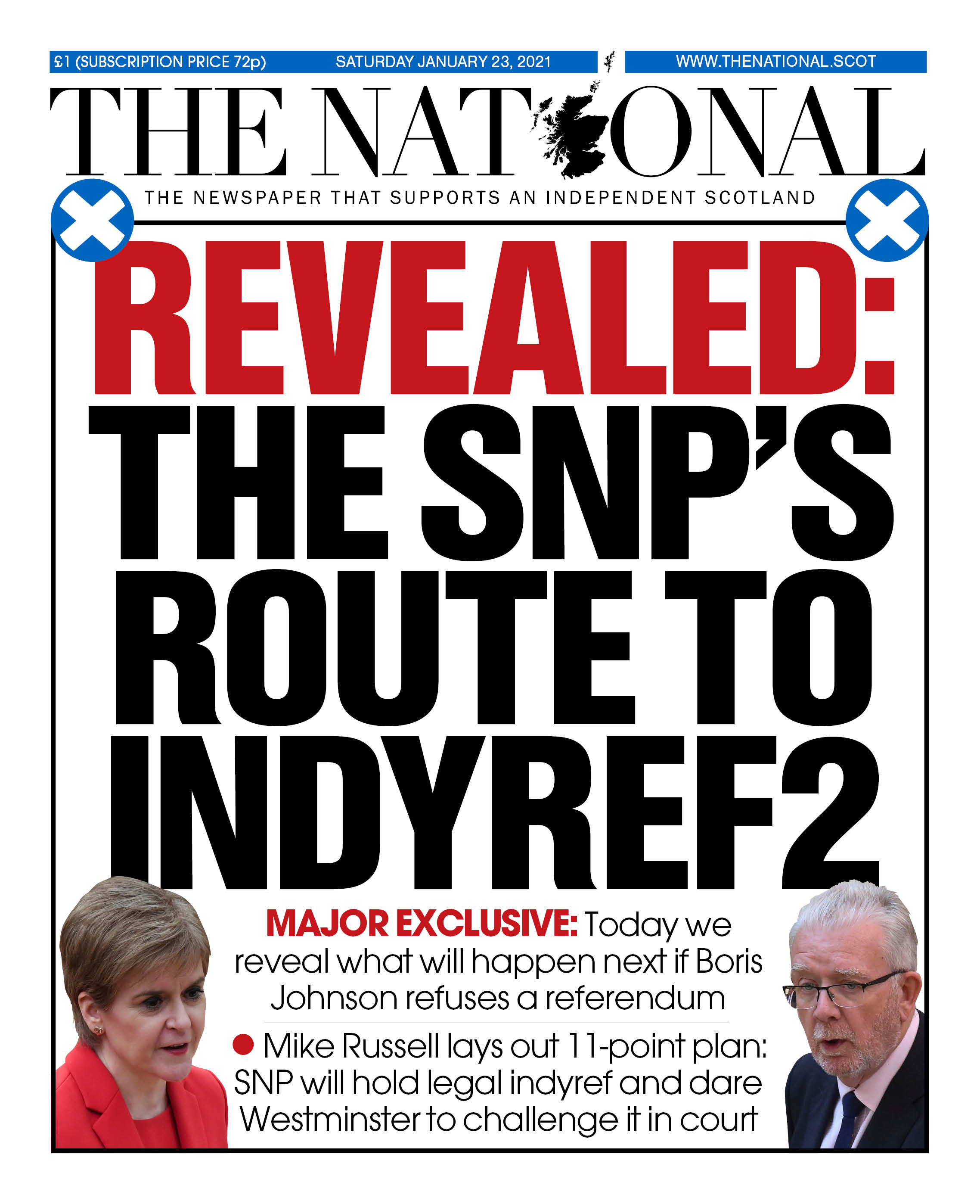 The Scottish Government published its “11-Point Plan” in The National today. As has been said elsewhere, most of the points aren’t really a plan at all – merely a restatement of previous events. Point 9 is worth noting as it states that a democratic mandate should not be reliant on a single party but that it should stem from a Parliamentary majority capable of passing an Indyref Bill in Parliament. I would go slightly further than their call that a mandate should stem from “either [the SNP] gaining an overall majority or if it had such a majority as a result of support from another pro-independence party” as I believe that it should simply rest on the Parliament being capable of passing an Indyref Bill regardless of where the votes come from. This would open the mandate to rebels within nominally “pro-Union” parties protesting against their party’s denial of democracy or even a pro-Union party mounting a “Bring it On” style challenge to the pro-indy campaign.

On the substance of the strategy though, only Point 10 is particularly significant and offers a change to previous policy.

That’s right. Less than 24 hours after opposing a court case on the grounds that the prospect of an unsanctioned referendum was a purely hypothetical exercise (and several days before the verdict of that case is due), the Scottish Government has made sure that it’s not longer a hypothetical argument. Whether this influences the decision of the court shall remain to be seen (and if the judgement does cite the “hypothetical” nature of the argument as a reason for a decision against them, it will likely trigger an appeal).

Just as seriously, this means that the National Assembly meets tomorrow having now been handed a party strategy ahead of them being given the chance to discuss and determine it – after, remember, being forbidden to have that discussion until this Assembly. The very purpose of the Assembly has either been undermined (as members will now be under pressure to simply ratify the strategy handed down to them rather than to discuss a variety of options) or the Scottish Government has set itself up for an extremely embarrassing headline announcing a U-Turn (if the Assembly decides to reject this strategy in favour of another). Neither option is a particularly good one for the party but of the two, I’d much rather see a political party’s leadership be instructed and guided by its members than the other way around. The party wants to live up to its self-styling as “the vehicle of independence” then it should be the members who drive that vehicle or at least who tell the driver where they want to go.

And, of course, the strategy here still doesn’t really address the problem of what happens if Johnson calls the Scottish Government and does challenge the decision to mount an unsanctioned referendum. Assuming the current action hasn’t already answered that question then all it does is push the independence horizon down the road another several months (or years) until it is resolved. And then either the referendum can happen or it can’t.

If it can’t, what then? What is the route if an unsanctioned referendum is not possible under the UK Constitution and then where does the Scottish Government go from there? It can’t be back to another Section 30 request. Johnson (or his successor by then) would have even less to lose by denying it.

And so we come right back to Within Our Grasp and the concept of a pressure campaign. I want to encourage all delegates at the Assembly tomorrow to consider the ramifications of any indy strategy that they’re asked to design, discuss, ratify or approve. Consider the UK Government’s stance. Ask why they would accede to your demands. Ask how this plan is going to achieve its goal.

The article in the National does mention that if the UK Government refuses to accept another Section 30 after the election then “…[I]ts position would be unsustainable both at home and abroad.” Assembly delegates should ask the party leadership why they believe this to be the case and to what extent?

Are there plans, for example, to cultivate links of solidarity throughout the UK to ensure that a democratic deficit in one part of the islands is seen as a threat to the democracy of all? If not, why not?

Has the Scottish Government been scoping out international support so that other countries are willing to meddle in the “internal affairs” of the UK in a way that they weren’t for Catalonia? If not, why not?

Is there a plan to apply pressure directly to Johnson by embarrassing him in the Parliament or disrupting his ability to govern until he relents? If not, why not?

And if the party refuses to take the lead in the independence campaign, will it allow the broader movement to take up the mantle? If not, why not?

I hope we’ll see more details of this plan come out when it is explained to the Assembly tomorrow because based on reporting of it today it simply does not look like a plan based on strategic thinking. If the leadership cannot provide that depth of thinking even seven years after the last independence White Paper then it has to be up to the members of the party and of the wider movement to provide it for them. If this is the first glimpse of the “secret plan” that so many have hoped existed somewhere in the depths of the Scottish Government that we weren’t allowed to see because it would give the game away, then it is sorely lacking and a prime example of why such debates are best had in the open where the wisdom of the crowds can build them far stronger than any individual can.

And if all of this sorely overestimates the Scottish Government entirely and the actual plan is merely to buy time and votes then maybe it’s time for party members to decide if the party is acting as a political tool or if they have been taken for one.