Scotland has enormous reserves of various types of energy. Which sources should we exploit and why?

Scotland’s resources are so vast that they far outstrip our own reasonable demands. Industrial estimates put Scotland’s total renewable electricity potential alone to be some five times greater than our domestic needs. Instead, we need to think about the kind of country we would be building around those resources.

We could leave our energy potential in the hands of others. We could see the last of the North Sea sucked dry with no plan of how to replace the jobs and industries currently relying on that resource. When the oil companies move on, what happens to the workers they leave behind?
We could buy our renewable hardware from the lowest bidder. German and Chinese companies could deliver the wind turbines owned by multinational corporations which take their profits from your utility bill.
We could allow ourselves to be utterly exploited by companies building the new generation of nuclear plants. I cannot justify the government allowing these companies to charge not less than double the current electricity rate as a pre-condition of merely building these plants when there are better ways already coming online. The extortionate profits from those plants will be channelled into public services…in France and China. Nationalised electricity companies are, apparently, only for “foreign” countries.

We could be content to allow very, very rich people with intimate links to the Westminster Government to frack shale gas out from under your house without your permission and with very limited recourse if things go wrong. If you have not seen the story of fracking in America laid out by Josh Fox’s documentary Gasland then please seek it out. Frankly, it scared me.

Or perhaps there is another way.

Whilst our renewables sector are impressive, there is so much more we could be seeing happen in Scotland.
I can imagine a Scotland rapidly expanding our offshore wind and wave resources towards producing some 25% of the entire EU’s offshore capacity. We could be forming national companies dedicated to building their hardware in Scotland. I can imagine our Clydeside shipyards building offshore wind turbines in volume along with the ships required to install and services them. As well as the ships required to lay the undersea cables to bring the electricity back to our homes or to export the energy to the continent. I can imagine a Europe no longer at the mercy of someone threatening to turn off the gas taps to extract political favours. [Readers interested to see our offshore potential graphically are encouraged to look at the Atlas of UK Marine Renewable Energy Resources at http://www.renewables-atlas.info/] 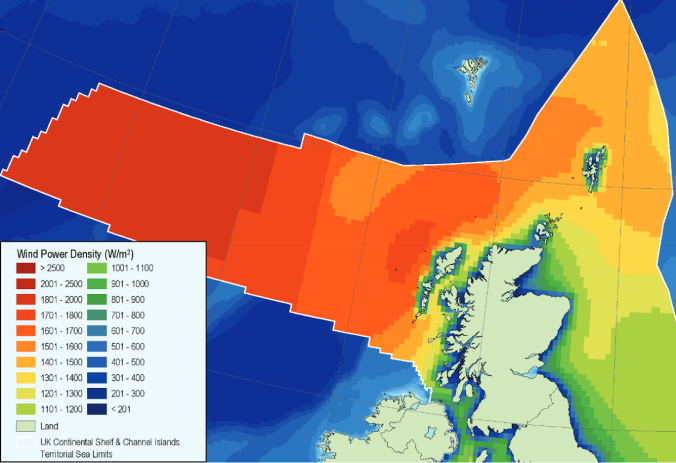 Of course, electricity generated when it’s not needed is useless to us so I can imagine our universities being filled with bright, young graduates busy developing the next generation of energy storage devices. I see free University education paying itself back many times over by promoting the spinning out of manufacturing companies providing high tech, high skill, highly paid jobs producing these devices in their myriad forms. Pumped storage hydro, both on and offshore. Banks of rapid response capacitors. Flywheel storage devices on every street. Compressed air storage in our hills. I can imagine oil rigs in now dry fields converted into energy storage and distribution platforms. I see those thousands of rigger jobs maintained long after the oil itself is gone. [Again, readers interested in learning more about various forms of energy storage are highly encouraged to read the Electrical Energy Storage White Paper produced by the International Electrotechnical Commission in December 2011. http://www.iec.ch/whitepaper/pdf/iecWP-energystorage-LR-en.pdf]

I see our houses shining with photovoltaic and thermal solar panels. I see our old coal mines flooded and converted into geothermal sources to keep our houses warm. Using our engineering and materials know-how, those houses could be so well insulated that we barely need to heat them in the first place. More jobs sustained by these installations and conversions.
Instead of multinational ownership we could own our electricity ourselves through a combination of nationalised companies and collective ownership schemes which would see communities earning an income from the electricity they themselves generate and export. The South Uist co-operatively owned wind farm generates £2 million worth of electricity every year. That which is not used by the community themselves is sold into the grid and the money is reinvested back into the heart of the community. It’s one thing to see someone else’s wind turbines popping up all around you. It’s another to know that they belong to you.

I can imagine currently exotic energy sources like Ocean Thermal Energy Conversion stations generating electricity from the temperature difference between the top and bottom of the sea. The resultant mixed sea water is ideal feedstock for aquaculture like fish and algae farming. Renewable energy could revitalise our fishing industry. More jobs, more investment.
I can imagine the Highlands repopulated, entire cities on the North West coast built to service the offshore fields with all of the other jobs and services which this would bring. We’d need to reconfigure our transport and energy networks to service them and so would need to hire Scottish engineers in their droves to do it. We could then export that experience and skill to the world and show other countries just how to do it for themselves.

One of the consequences of Global Warming is that the melting icecaps open new trading routes. A ship travelling to Europe from China which once would have to travel around India, through relatively dangerous seas off Africa and through the Suez Canal could save 40% on their time and fuel by taking a short cut over the top of the world. I can imagine hydrogen generating stations built on a seaport in Orkney or Caithness. Container ships from Asia and America could over the North Pole and stopping to refuel. I can imagine a shipping port to rival Southampton or perhaps even Singapore relying on Scottish renewable energy and paying harbour fees to a nation ideally placed as a gateway to the world. Not bad for that “poor, wee” country on the edge of London’s mental maps.

I can imagine these things. Scotland could build these things. We could make this happen.
The choice ahead of us though is this: Do we leave this potential in the hands of someone else and hope that they have our interests in mind? Or do we harness this potential, roll up our sleeves, get our hands dirty and build it ourselves?

This post was adapted from an article first published in the July 2014 edition of Yes Clydesdale’s Aye Magazine. http://www.yesclydesdale.org/magazine/magazines.html