“It seems obvious: the reason only a tiny percentage of new…buildings and retrofits aren’t green isn’t cost. It’s lack of ingenuity or knowledge of new construction techniques — architects and builders wed to the ‘same-old,’ lenders leery of anything unconventional.” – Sustainable Energy Africa 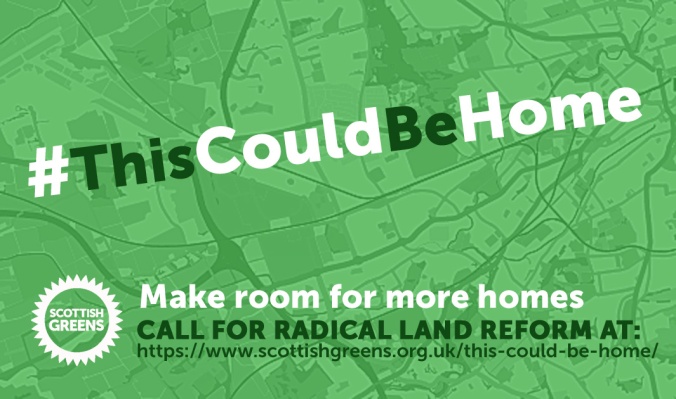 The Scottish Greens have launched our new #ThisCouldBeHome campaign aimed at greatly strengthening the current movements towards better land reform.

There are currently around 11,000 hectares of land in Scotland current derelict or un- or underused which, through the application of a Land Value Tax, could be freed up to build a new generation of affordable housing. Here is Andy Wightman introducing the campaign.

As the campaign points out, the current UK housing bubble is pushing rents up beyond the affordability of far too many people and those increasingly fortunate few who can scrape together a deposit and have secure enough employment to sustain a mortgage are looking with trepidation towards the day that the Bank of England starts pushing interest rates back up towards pre-2008 levels. For hard pressed people who can barely afford to pay the bills as it is, moves like this could result in yet another crash in the housing market and more families facing default, foreclosure and eviction.

We also live in a country with the second highest level of excess winter mortality of any European country north of the Alps, driven in large part by our lax building standards and fuel poverty.

For this reason, we should take this opportunity to ensure that those new houses which are built adhere to strict building regulations which push the limits of our technological abilities to ensure that energy bills and the other ongoing costs of running a building are kept at an absolute minimum. Of course, buildings are themselves often constructed to meet only the very minimum standards set by law as to do otherwise would eat into the private construction industry’s precious profit margin.

Of course, as the headline quote states, cost isn’t nearly the greatest obstacle to greener housing development and, as I have written previously, the Scottish government will soon be handed the power to borrow money far cheaper than can any bank or private company (As an alternative, the Common Weal has also pointed out that the Government has the power, today, to set up Scottish Housing Company to perform the same function) and could use that money, paid back through rents, to undercut the private industry and ensure that the highest green standards are adhered to. The precedent for this already exists in Scotland where, according to official government figures, the social rented housing stock are generally more energy efficient than private builds and contain a higher percentage of B and C grade housing (where the overall Scottish average is merely grade D). If we are willing to push things as far as we need to to reach a zero-carbon economy then a greater pool of cheap, efficient housing will force the private sector to either step up its game or step aside. 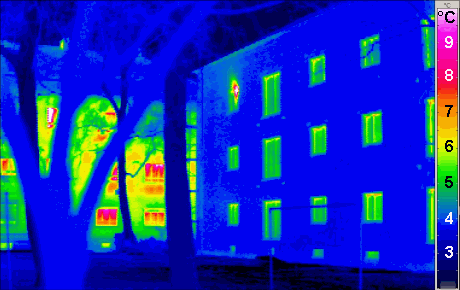 A Thermal image of an energy efficient “Passive House” compared to a more traditional, less well insulated dwelling behind it. Source: Passivhaus Institut

But how do we get everyone to A grade? One pathway can be found in the Passivhaus Standard which employs a strict understanding and approach to engineering and techniques such as solar thermal panels on roofs, underfloor ground source heat pumps, insulation throughout the house and architectural elements designed in from the start to minimise heat loss and maximise the amount of energy which can be harvested from the environment. Properly employed, these standards reduce a house’s heating requirements to below 15 kWh per square metre per year. By comparison the average Scottish house requires approximately 140 kWh per square metre per year to keep it warm. It’s no wonder so many of us struggle in winter. (Fun fact about Passivhaus, they have built a compliant dwelling now on every continent on Earth. Including Antarctica!)

With heating making up 55% of Scotland’s overall annual energy demand and only 10% of that heating coming from renewable sources (including renewable electricity) then it is clear that this is the area which, if targeted, will have the most potential to reduce our requirement to run a carbon based economy. This needs to be stressed. Whilst the Scottish Government has made great strides in pushing renewables (and despite the UK government’s increasingly hostile attitude towards them) if we only focus on meeting of our current electrical demands then we’ll still be reliant on fossil fuels for over three quarters of our energy and this doesn’t factor in the doubling of electrical demand which will come if we translate our transport system over to electric vehicles (assuming we don’t also reduce demand there too).

To achieve this may seem to require brave choices. But we can’t sustain the “same old” attitude for much longer. Pretty soon, doing nothing will be even “braver” (in the Yes Minister sense). I believe that a strong Green voice in the Scottish Parliament from May will help the government make those brave choices and your vote for the Greens in May will help that happen. As noted earlier, it’s not a problem of money or power holding us back here. Merely the will to roll up our sleeves and do it. We’ll be glad for it once we have. We’ll wonder why we didn’t do it sooner.

4 thoughts on “This Could Be Home”