Economics: The art of explaining why all of your models fail to predict either the future or the past.

It’s that time of year again when everyone starts looking at the first page of a dense booklet of economic data and uses it to wildly forecast despite long known limitations in doing so. So it’s also, once again, time for me to try looking a little further to tease out some details that others might have missed.

First, to get some of the headline figures out of the way. There has been a slump in offshore oil revenue due, largely, to the crash in the oil price resulting from the ongoing economic conflict going on between Saudi Arabia and the US.

…except…total current revenue is only down £600 million. Down from £54.050 billion last year to £53.443 billion this year. That’s just a touch over 1% of a change and is comparable to some of previous year’s “budget underspends“, thus it could even be said to be within the margin of error of budget estimates. So what is going on?

The first thing to understand is that our transport and energy infrastructure is still almost entirely dependent on oil thus is highly sensitive to changes in price. When oil prices go down, fuel and heating becomes cheaper which allows the average consumer a bit more money, assuming a fixed income, to travel and to spend money in the local and greater economy. This drives up demand, which leads to more non-oil jobs, more supply and a general increase in economic activity. Indeed, some sources credit such effects as being even stronger, in the long term, than the shock caused by the collapse in the oil industry (of course, this is of small comfort to someone who actually works…or worked..in the North Sea but these figures are, of course, only looking at the country wide macro-economics rather than the industry or person specific micro-economics). This likely goes a fair way in explaining the year-to-year increase in income tax, onshore Corporation tax, VAT, fuel duties and the like.

Now, it can also be seen that the UK’s receipts are rising too, by around 3-4% (as it has done for the past few years) but there is a critical couple of numbers missing from the these raw data which hasn’t been accounted for. First, inflation in recent years has run at around 1-2% and the UK’s population is rising at approximately 1% per year (largely due to inward net migration) whereas Scotland’s population is and has long been largely static (and, of course, the Scottish Government has almost no control over immigration).

These figures erode the UK’s real terms revenue per capita growth rate to very nearly zero. George Osborne’s “fastest growing economy” is clearly not being felt in the pockets of the average Briton (It also, as a side note, shows the positive, or at least neutral, effect of immigration to the UK. Those folks coming in are clearly paying their way and are not being a “burden” on the taxpayer).

With these factors laid out, and bearing in mind that some of the feedbacks can take some time to work through the system, we can consider Scotland’s overall change in GDP (I know it’s not the best single figure with which to measure an economy but it’s the one everyone uses) which, if the critical voices are correct should have taken an absolute catastrophic dive in the wake of the collapse of oil. What has actually happened, as laid out on page 35 of the GERS figures, is that North Sea GDP has dropped by £5.67bn from £18.2bn to £12.5bn but that the onshore economy has risen by £5.54bn from £135bn to £141bn. The Scottish economy has shrunk but by only 0.09% or £132 million. Not bad for an economy supposedly “reliant on oil”.

So now we can look a little deeper at some of the other comparisons between Scotland and the UK within GERS. Scotland’s population share of the UK is 8.3% so any tax revenue which lies at or around 8.3% of the UK revenue can be said to be broadly similar to the UK’s receipts (with some very notable exceptions. It turns out that there is very little data for some  taxes which disaggregates Scottish and rUK receipts, for example, VAT, National Insurance and tourist related taxes are not noted in this way thus, for the purposes of GERS, a straight population share is generally assumed. This should be recalled when trying to extrapolate such figures to the performance of an independent Scotland. The data simply doesn’t exist to support any such extrapolation).

As noted in my article last year, income tax, corporation tax and capital gains tax remain significantly below the UK average despite Scotland having a higher employment rate than rUK. This shortfall reflects a lower average wage and lower rates of the very rich living in Scotland (For some reason they tend to prefer living in overpriced cramped bedsits in London than buying mansions and castles in Scotland, at least for their “first” home…) and amounts to approximately £2.3 billion potentially lost to the Scottish coffers. This is a substantial increase over last years figures of a £1.7billion shortfall and reflects the increasing concentration of the UK economy inside London and the South-East. 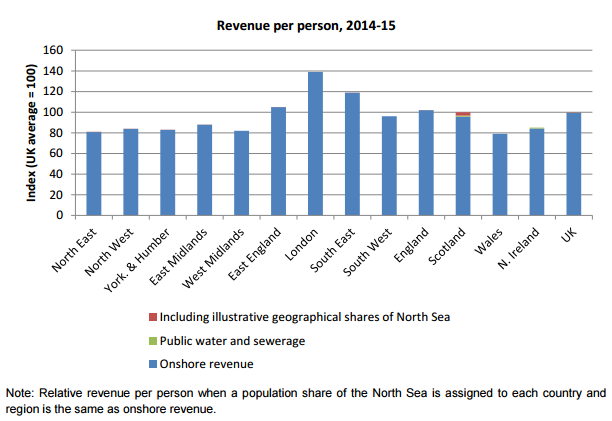 Now, if Scotland had full control over its income tax rate it could adjust banding, *including the zero-rate Personal Allowance*, to set rates more commensurate to the Scottish demographics and economy. We might even consider raising the minimum wage to the Living Wage to increase both the amount of income tax paid and the amount money people would have to spend in the local economy which, as we’ve seen, is the primary driver of overall economic wellbeing. But, as we know, we’re not getting nearly that level of control. We’ll be able, eventually, to adjust non-PA bands but the PA is the one that almost everyone falls into. Changes to that will severely curtail the Scottish Governments ability to use its income tax powers and, of course, we’re not getting any power over Corporation Tax, Capital Gains, National Insurance or VAT (the accounting adjustment being fobbed off as a “devolution” of VAT in the Scotland Bill 2015 doesn’t count outside the most ignorant of political rhetoric). With notional control over only about 30% of Scottish income (and, as said, with severe caveats on much of that) Scotland’s economic fortunes will still be strongly tied to the whims of Westminster. Another thing to remember if trying to extrapolate to the fortunes of an independent Scotland.

As last year, we can also see the “surplus” revenue within Scotland compared to the UK in tobacco, alcohol and gambling contributing some £575 million above the UK expected average and directly relates to the stressors of living in an unequal society. It must be noted though that this “surplus” and, indeed, the total revenue from these taxes has dropped since last year which is, alongside a fairly flat change in health spending, potentially a positive indicator of better wellbeing within Scotland.

On the expenditure side, there’s rather less to say as much of it has remained more or less static in recent years. The total expenditure has increased by about £900 million which means that the notional fiscal deficit (including current and capital budgets) has increased from £13.4bn last year to £14.9bn this year which represents 9.7% of GDP. This is the number that will be hinged on by many commentators as showing how much of a “failure” Scotland would be as an independent nation but it does miss some very critical factors. Just as Westminster controls some 70% of the revenue of Scotland it also controls more than 40% of the expenditure IN Scotland (including well as expenditure outside but “on the behalf of” Scotland). This includes very large keynote items such as social protection, defence and the financing of the national debt. It is quite simply impossible to use these numbers in reference to the fortunes of an independent Scotland as the whole point of Scottish independence is to gain control of these levers so that they can be changed. In particular, the debt services assumes that Scotland would, at the outset, take on a population share of a debt burden almost entirely wrung up outside of Scotland. It is almost inconceivable that this would actually occur and any Scottish government which argued for it would be digging their own grave at the outrage. Similarly, Scottish defence spending occurs very largely outside of Scotland and one could follow the SNP’s plan to increase national defence whilst realising a very significant saving to the budget line. Or, one could go further and follow the plan of others to almost entirely demilitarise as Iceland has done or to build an outward looking humanitarian and aid force instead of an armed military. Similarly, a country which pays people enough to live on may find itself with a population which doesn’t need quite so much social “protection”. With independence, these options would become available but not before. We should also consider that trying to judge any country based on one, two or even a dozen years is fairly pointless. The whole point about Scotland is that we would be in control of ourselves for generations, not just the Tory driven lost decade after the Great Recession of 2008.

So hopefully that’s that for another year. Scotland remains a country under some strain and without the powers to release some of that strain ourselves. But it remains a country remarkably resilient and, all things considered, the worst, gleefully anticipated, nightmares of the anti-independence commentariat have been averted or have been shown baseless. Scotland remains full of potential if we want to use it. And, though it seems further off than we had hoped, independence is still a bright horizon towards which we should walk.