Whilst we’re still just a bit too far away from the elections to get to see the actual manifestos, something resembling policy is now starting to trickle out from the parties.

Given the currently still limited nature of tax raising policy within Scotland it’s natural to focus on those areas where control is possible and since the publication and acceptance of the Commission on Local Tax Reform’s report on the need for an overhaul in local taxation in Scotland. So far, both the SNP and Labour have released their detailed plans and, so far, both have been somewhat lacking in ambition.

The SNP plans declined to follow much of the spirit of the recommendation of the Commission, spinning that they were, in fact, changing the present Council Tax, rather than the system itself, and have merely decided to increase the rates applied to the top four bands of the tax. In fairness, this will likely increase total collected revenue, to the tune of about £110 million per year (although their planned extension of the Council Tax Reduction Scheme would cost about £13 million of that to implement) but comes at the cost of not only perpetuating the system of the Council Tax but further entrenches the stripping away of powers of regional councils to control their own resources.

Today, Labour are out of the gate with their plans, clearly aiming them at “beating” the SNP proposals rather than actually tailoring them for the Scottish Good.

Touted as a “replacement” to the “SNP’s Council Tax” (introduced, as we recall, in 1992 by the Tories), Labour have pledged to “make good on the SNP’s broken promise and scrap the council tax” and have opted to remove the old regressive, property value based banded tax and replace it with a regressive, property value based banded tax with bands almost entirely (with one exception within band ‘F’) identical to the previous one and with rates which do, in fact, cut taxes compared to the status quo for housing in bands A-D and increase taxation  in bands E-H (with a very sneaky tax cut compared to the SNP plans in bands D-E so as not to knock the feet out from the argument that the SNP want to “punish hardworkers”. 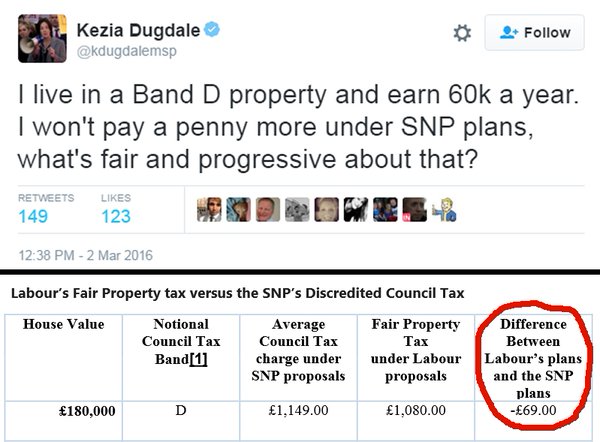 Now, I’m not going to claim that the Labour plans are worse than the status quo in their intent. They are clearly less regressive, though still downward sloping, but I’ve noticed that the sums don’t seem to quite add up. The projections appear to show Labour’s proposals bringing in some £141 million per year less than the status quo (not including their projected costs of £8.5 million for each housing revaluation). Labour do claim that they shall be adding, on top of this, some kind of tourist tax and land value tax on “vacant, economically inactive land” but the numbers for projected revenue or even tax rates do not appear to be available and the party has made it clear that these taxes would be optional for local councils to implement.

Digging deeper into the detail and we also see a quite arbitrary cap on property tax at £3,000 per dwelling regardless of size or cost. Again, how this serves to differentiate from the Council Tax is puzzling to say the least.

Now the Greens will be publishing their full local tax proposals next week and I shall write an annex to this piece when it arrives but I think I can see already from previous proposals what form it may take. The Land Value Tax should be a major component of the plan and details published by Andy Wightman can be used to calculate the impact on housing.

Setting the LVT at around 3.16% (chosen for the purposes of budget neutrality) of the land’s value results in a tax system which is far more progressive, gives far greater comparative savings to those in low-banded housing and charges far greater rates for those in more expensive bands with no upper limit since the tax is levied as a % of property value rather than some arbitrarily capped band.

Now, it should be said that the LVT applied this way appears also to fall into the same problem as Labour’s plans in that total revenue from housing is down £115 million versus the status quo but the Greens’ LVT significantly broadens the tax base by folding in business rates and by also, naturally and without special exception, taxing vacant land, forestry and sporting estates, agricultural land and other potential uses. Why should the Duke of Where-ever pay only £3000 on his mansion and nothing at all on his vast tracts of forest plantation and private hunting grounds? These changes make up for the overall cut to the housing revenue and, crucially, allow councils a greater level of control over a broader tax base and thus greater freedom to manage their own affairs. Should a council find itself with few mansions but more forests, for example, then it can and should have the freedom to adjust the rates on various land uses.

I’m glad we’re now able to have this long overdue discussion about local taxation. It cuts to the heart of what it means to live in Scotland and to live in particular areas of Scotland. Properly used, it shall allow areas to develop their own unique character and to exploit their own unique strengths. I hope the parties will do more to set it free and to grant our councils more of their own independence. Local taxation simply cannot be a tool for national parties to throw at each other or from which to consolidate their own power bases. Let’s put Scotland, All of Us, First on this one.

Addendum:- Since I’ve seen a particular question pop up a couple of times with regard to this article, I should expand a touch on the figure given for Labour’s re-evaluation costs. As far as I’ve seen they haven’t said how frequently they’d want to perform such a re-evaluation annually. They certainly could but I doubt it’d be necessary. We’d certainly need one immediately seeing as the current valuations are a quarter century old but beyond that I’d suggest perhaps simply re-evaluating properties at point of sale and a national evaluation once every 5-10 years. That is, of course, a detail for each of the parties to work out for themselves.