There is a school of economics known as Modern Monetary Theory which attempts to take this more holistic approach to national finances. If you want a detailed explainer of how it works, I highly recommend Cameron Archibald’s blog on the topic here.

The essence of the theory is that if you are a government which controls its own money supply (i.e. has it’s own independent currency) then government deficits are far less important than is the case otherwise and it can actually be to the benefit of the economy to run one.

There is a link between the budget balance of the government, the budget balance of the private sector (which can be split between household budgets and the budgets of private companies) and the balance between the country in question and the rest of the world (which includes trade, investment and transfers of money such as remittances). Simply put, these three factors tend to sum to zero so that any change in one results in the opposite change across the other two factors. 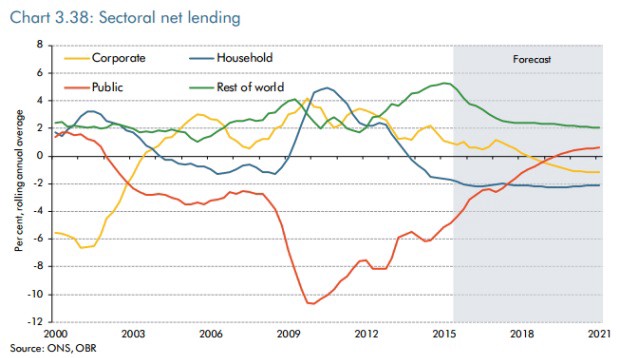 Assuming that the balance with the rest of the world doesn’t change (we’ll get to that) and the government decides to use Austerity to cut the government deficit then the public deficit must increase.

To see why this association is true, let’s take a simplified example.

Now, you also need public services. Education, security, healthcare and everything else. For this simple example, let’s just assume the only public service you consume is healthcare. Let’s say you need £3,000 worth of care per year.

So the government is receiving £2,000 in tax from you and is paying out £3,000 in services. It has a national deficit of £1,000 per year and everyone agrees that this is terrible and that we need Austerity.

So the government sells off the NHS and saves £3,000 per year but even it knows that it needs to win your support to get through the next election so it also promises to cut your taxes by £2,000. With an income of £0 and an expenditure of £0, the government has eliminated the national deficit.

But, as you soon realise, you still need healthcare. You still need £3,000 worth of healthcare per year. You might have saved £2,000 in taxes but that still leaves you with £1,000 to find to pay for that care. Now YOU have a budget deficit and need to either borrow money to make up the gap or cut spending elsewhere.

In other words, the government’s deficit was YOUR surplus.

And this is where a government doesn’t look anything like a household budget. If you start paying for that deficit on your credit card then you’ll fairly quickly hit your credit limit and the banks won’t give you any more. If you set up a press in your living room and start printing money, you’ll very quickly go to jail.

And so your only option is to cut back on spending. First, you’ll stop saving money for the future. Then, your discretionary spending on widgets and things drops – causing the widget industry to dry up and shops that sell things to close. Then, as Austerity continues, you have to start cutting back on the less discretionary stuff. Fuel poverty starts to rise as people begin to choose whether to heat their house or feed themselves. Malnutrition starts to increase as even that choice gets taken away from some folk.

And herein lies the paradox of Austerity. By cutting back on public services in such a way as to harm the health of citizens, the demand for services such as healthcare goes up. It’s no wonder that NHS services in England are so very near to total collapse.

So, rather than taking the elephant appraisal view of only looking at the deficit, how about we instead take the MMT view of looking at the system as a whole.

First, we’ll look at the country’s balance with the rest of the world, also known as the current account. Countries like Germany have it comparatively easy. With a current account surplus of around €20 billion per month, Germany could run a national budget surplus of tens of billions of euros per year and there would still be enough money flowing into the economy to allow the private sector to run a surplus and allow ordinary people to consume everything they need and still be able to save money.

The UK, on the other hand, runs a current account deficit of around £23 billion per quarter. The logic should be inescapable at this point. Whilst the UK maintains such a trade deficit then it must choose between running a relatively sustainable deficit in government spending (because, as Cameron notes in his blog, countries can ALWAYS print more of their own currency if they have one and so can always pay debts denominated that currency) or it must run an unsustainable deficit in the private sector. The Tories and all those who advocate Austerity have chosen the latter.

So, should we focus on the trade deficit instead then? Well, there are things that can be done here. “Import substitution” is one policy whereby you encourage people to buy locally produced goods and encourage investment in local economies (possibly even using local currencies to make it harder to ship money out of the economy), one could even use protectionist policies so keep production inside an economy, especially in areas in which one has a unique reputation. However one must also be careful that this kind of thing doesn’t end up triggering a trade war. Contrary to at least one man’s personal beliefs, they aren’t always good or easy to win.

Ultimately though trade policy hits a fundamental limit. Countries like Germany can only be like Germany because the countries with whom they trade are not Germany. The only way you can have a trade surplus is if someone else has a trade deficit. There’s no getting around this and focusing too tightly on trade policy is just like switching the elephant’s trunk for its tail.

There are further nuances in this model. Earlier, I mentioned that the private balance is a combination of household balances and company balances. If you do arrange your trade and government balance such the overall private balance is in surplus, it does our households no good if all of that surplus goes into companies or the very wealthy – the way Quantitative Easing has largely gone. This is where things like government policy has to be used wisely too to constantly fight against the natural tendency towards increasing wealth and regional inequality.

(Regional inequality in the UK compared to other European countries.)

This may mean policies such as a Universal Basic Income to ensure that everyone can afford to live and higher, more progressive taxation to ensure that those who already can don’t end up accumulating wealth and taking money out of the economy. It may mean building better housing so that those who can’t afford to heat their homes no longer need to. It may mean better food policy because a hungry, malnourished child is simply not going to be able to learn effectively no matter how much money you throw into education.

I understand that this is all a very complex topic. Economics is the art of studying a shifting and dynamic system. Adjustments in one area can have ramifications in areas that, unless you look very closely, may appear unrelated. We must build our economies so that they serve people first, rather than numbers like GDP Growth or budget deficits. In an era of fast news, soundbites and headlines it’s far too easy to get bogged down with “simple” questions like “How will you eliminate the deficit?”

It’s a lot harder to ask “What will happen if you do?”.

13 thoughts on “We Need To Talk About: The Deficit”