As promised, I can finally reveal my work examining Scotland’s currency options going forward into the next independence campaign.

My report has been published through Common Weal and can be read here or by clicking the image below.

In it I first examine the macroeconomic considerations which go into selecting a currency option, chiefly looking at the interaction between movement of capital, interest rates and exchange rates. It turns out that it is impossible to have full control over all three at any one time so all currency options entail therefore some degree of risk or management requirements including the founding of infrastructure such as a Central Bank. All options have their advantages and disadvantages, their risks and rewards.

Several currency options are then laid out alongside some of those advantages and disadvantages. The principle ones are:

Gives Scotland more control over currency than it has now but limited control compared to most other options. Subject to “veto” by rUK and may well be impossible in light of a post-Brexit rUK and an independent Scotland inside the EU.

An easy option to do and would only require the set up of a fairly lean monetary board rather than a full central bank. Would not require minting of new money. But Scotland’s economy is a larger fraction of the rUK’s economy compared to other countries which “Sterlingise” like Ecuador to the USD, Andorra to the EUR or Liechtenstein to the CHF. This may result in divergent and sub-optimal economic choices being made by the BoE which would not be obliged to consider Scotland even as an aggregate within the UK. The UK would also be able to keep all seigniorage resulting from minting of money which would be a loss to Scotland of about £50 million per year.

The Euro was a surprisingly popular option in my recent currency poll which placed it as around three times as popular as the combined Sterling options. It may well be good for Scotland, being a trading exporter, as the currency is being kept artificially weak compared to stronger former currencies like the German Mark. However, the loss of monetary sovereignty and, especially, the lack of a formal exit protocol if the union disintegrates may cause concern. Whilst Scotland couldn’t formally join the Eurozone on day one of independence there would be nothing, in theory, stopping us from running a referendum campaign on the basis of either unilaterally using the Euro or trying to join as soon as possible.

Other options such as a Gold or Oil standard or of using a Cryptocurrency like Bitcoin are also discussed within the full paper.

All in, I’ve concluded that a £Scot would be the right option for an independent Scotland. This would initially be pegged to Sterling but, as stated above, we should not shy away from moving that peg if it becomes to our advantage.

Once we’ve decided on launching our new £Scot, practical matters like the setting up of a Central Bank (citing potential models like Norway, New Zealand or Slovakia) will form the heart of a new macroeconomic policy and the importance of getting that right for us cannot be understated. This would be a good opportunity to launch schemes such as a National Investment Bank which use its place within the Central Bank to intervene in the Scottish economy where desired and to help tailor it to meet our needs. Other considerations like the size of a foreign reserve (around 5% of GDP. Roughly £10 billion) and how we could build it are examined too.

Finally, the design and launch of our currency should be undertaken in a participatory manner. The actual practicals are comparatively straightforward when managed well but a new country needs a strong sense of commitment and ownership from its citizens and the participation in the design of our new currency could be an important step in this regard.

Please read the full report to dive into the details of the analysis and I do hope it provides a useful and important source to take with us into the new campaign.

Press Coverage for the Report

A live interview on the evening news covering the Sterling peg and the possibility of changing it as well as my opinions digital or cryptocurrencies.

Summaries of the nine currency options and links to the report itself. 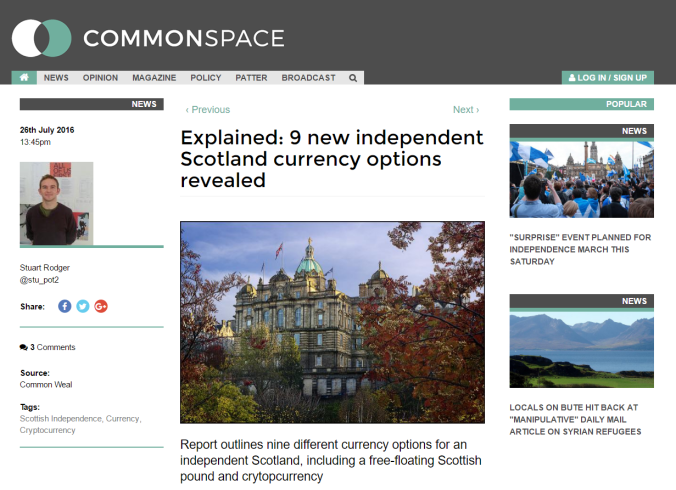 Front page feature and a two page article on the report as well as summaries of the nine principle currency options.

A slightly less than positive spin on the report focusing largely on the £10 billion sum estimated to be required for the foreign reserve fund. My work is now a “body-blow to Sturgeon’s independence plot”.

31 thoughts on “A Sovereign Currency for an Independent Scotland”