Here are the results as posted on the BBC’s live reporting at the time. 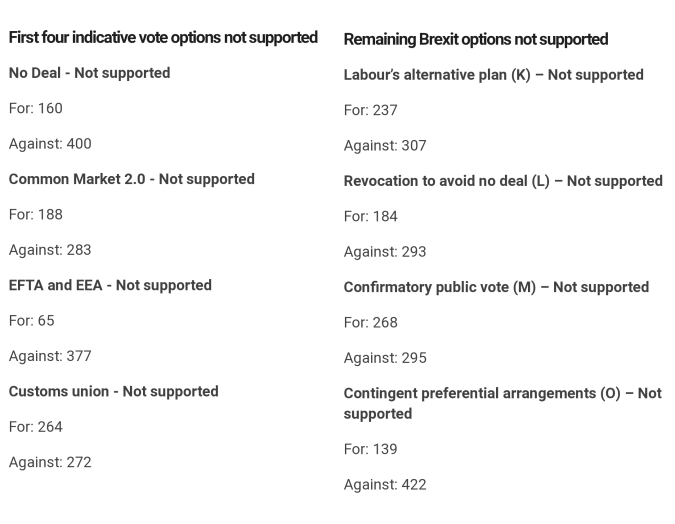 I’m not going to go through each and every one of these options but I will pick out a few worthy of a little more analysis based on their relative rankings. None of the options gained a clear majority but some clearly did better than others and may form the basis of some kind of compromise in the future.

The Most Liked – A People’s Vote

Talk of putting the deal back to the people in a second referendum has been around since before the first referendum but has been a fraught and fractious fight. As I wrote in a previous article, I’m completely for it on a point of democratic principle that the “Will of the People” MUST be considered to be subject to change and a democracy relying upon it must allow that change to be expressed. That said, the question of the question on that ballot paper still has not been resolved and I don’t think will be any time soon. Support for the People’s Vote at a party level remains tricky. Labour especially support it only if a General Election is not possible. Understandable for them as they desire power over result (as most, if not all, parties do) and certainly don’t want to get into a position where they win a General Election, win their preferred Brexit deal and then have that deal rejected in a confirmatory referendum. That’d be…inconvenient.

Still. The fact that the People’s Vote came out on top in terms of For votes may mean that this option gets revisited with rather more enthusiasm than we thought possible a week ago.

Interestingly, this option also received the highest turnout amongst the MPs with 561 voting either for or against the option.

The Most Hated – Contingent Preferential Arrangements

Tip for political strategists. If you have to explain what your title means, you’ve already lost.

This is the “Hail Mary Pass” of the ERG in the event that their No Deal couldn’t happen. In essence, it is an insurance scheme against falling into the backstop arrangements by renegotiating the deal on lines more preferential to the UK presumably by the application of magic fairy dust and plenty of pre-eaten cake. It’s a plan without a plan. And it’s in the dustbin now so we can stop worrying about it more than we already haven’t.

The only option on the Indicative Vote list that actually addresses the UK’s red lines, this plan attracted fewer For votes than the People’s Vote but also fewer Against votes and ended up with a majority of only -8. With a total turnout of only 536 this option received 27 fewer votes than the People’s Vote option meaning that a majority would have been technically possible had some of those 27 took a stand.

This option would see the whole of the UK join a Customs Union with the EU which would negate many of the border issues (including Northern Ireland) but would leave the UK largely unable to influence any changes to EU trade arrangements and would significantly inhibit the UK’s ability to negotiate trade deals with other countries. It’s the option that would be the least complex to implement and probably the least disruptive though I can fully understand why those seeking to make leaving the EU actually meaningful would find this option lacking. Believe me, I’m having much the same fight with those advocating for the SNP’s Growth Commission. 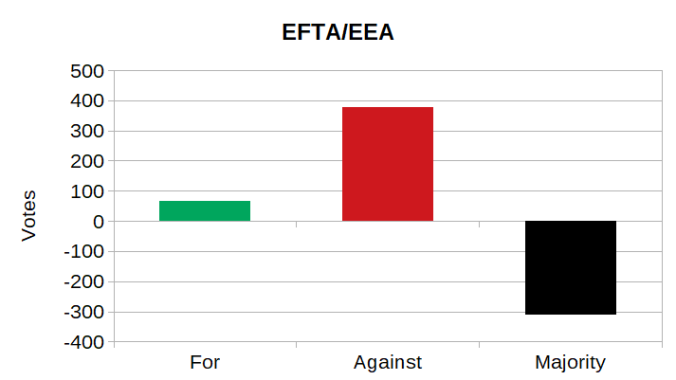 The “Norway Option”. If you’re going to negotiate a “soft Brexit” then some might say that it’d be best to at least have some structure to it. The UK could rejoin EFTA – the European Free Trade Association – and join the EEA – the free trade deal signed between EFTA and the EU.

There are objections to this plan. For a start, it would mean maintaining freedom of movement between the UK and the EU/EFTA states – something that the anti-immigration demographic oppose – and it is a plan that is not entirely within the gift of the UK and the EU to grant. The EFTA states would need to approve it and the relative size of the UK – which is almost 5 times the size of the current EFTA population – would pose a problem with the political balance of the blocs. EFTA might end up being more powerful in relation to the EU with the UK back inside it but any deals made would likely be to the benefit of the UK and could potentially be to the detriment of the other states (a familiar refrain for smaller nations within the UK dealing with one member making up ~80% of the whole…).

This option also received the lowest turnout of all of the Indicative Votes with only 442 MPs voting For or Against the option. This was 121 fewer than the People’s Vote option but with a majority of -312 even the presence of those missing votes would not have saved this plan.

Nobody knows! As Usual!

The Indicative Votes was precisely the kind of thing that would have been a great idea back in July 2016 so it now just seems more than a bit too little too late, especially as it hasn’t resulted in anything actionable.

Whilst this was all going on, Theresa May made her own Hail Mary pass to try to get her preferred deal (which wasn’t on the IV list as it had already been rejected by Parliament twice) passed. She has promised to resign and let someone else take the reigns for the next phase of negotiations – but only after the deal IS passed.

This is the next logical step for her though part of me doesn’t actually want her to go – the idea of shovelling one’s own manure rather than leaving it for someone else comes to mind. Not that that stopped Cameron from quitting after the referendum, of course.

As I write, it sounds like there’ll be another shot at the “Meaningful Vote” on May’s deal and the promise to quit seems to have swayed a few in the ERG (though not all and not the DUP). My last prediction on this was wrong in that I thought that it would have happened for Meaningful Vote 2. It may yet be wrong entirely in that it’s still unlikely that May has a working majority for her deal.

And meanwhile, the Brexit uncertainty is still causing major problems for businesses and is severely affecting the lives of thousands of people out in the real world and beyond the political bubble, including friends and fellow activists and folk close to me. I have strong feelings about what the Scottish Government could be doing on top of what it’s already saying about this human rights disaster but that’s for another article.

Scotland still has a chance to get something out of this stramash. Yesterday, the Scottish Parliament voted decisively in favour of revoking Article 50 entirely (something that the UK Parliament rejected 184 to 293). It’ll  be ignored, of course. Again.

Makes you wonder what it’ll take to be recognised as a member of this “Partnership of Equals”, doesn’t it?

In other news, I now have a podcast!
The Common Weal Policy Podcast is going to be dedicated to explaining Common Weal’s policy papers and discussing the latest policy news every Wednesday.

You can listen to the podcast on Spotify, Tunein and on the Common Weal website.

3 thoughts on “Sound and Fury, Indicative of Nothing”