While big business gain subsidies and political access, small businesses drown in red tape, and individuals now risk being classified as terrorists for complaining about it. – Zac Goldsmith

Did you hear about the latest story in Scottish land reform policy and the Scottish Government’s programme to restore peatlands as part of our Net Zero transition? You’d be forgiven if you didn’t. There hasn’t been much said about it in the Scottish or even in the UK media (at least until the last day or two). The American press, however, has been different. This week, the New York Times published a long-form study of what has been happening in Scotland’s peatlands lately and while I must encourage all of you to look it I must also warn that it doesn’t make for the happiest read. 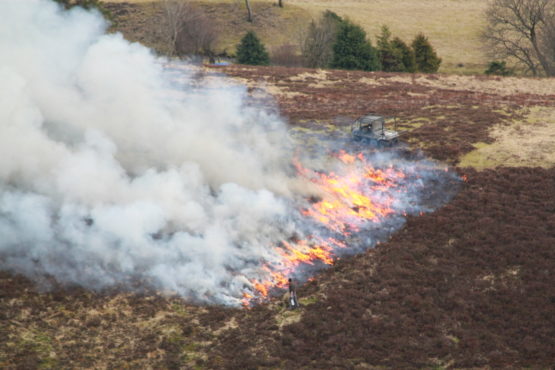 There is a serious issue with Scotland’s peatlands and the impact they are having on climate. When kept in good condition, they can be excellent carbon sinks – The Revive Coalition estimate that Scotland’s peat stores 25 times as much carbon as all of the UK’s forests – and when they are kept wet and covered with moss they will not only store that carbon for millennia (along with any ancient bog bodies or bog butter that might be lurking under there) they continue to absorb and lock up carbon as the top layers of living moss grow and get buried by new growth. However, these bogs are also vulnerable to damage and degradation. If the top layers are stripped away by grazing, excavation or burning then the peat underneath can dry out and start to decay. As it does so, it will  release that stored carbon back into the atmosphere. This is a particularly worrying problem in Scotland where our uplands are regularly and deliberately burned to encourage the growth of grouse populations which are then shot by wealthy patrons for sport. The Revive Coalition has estimated that around 4% of Scotland’s total land area is regularly and deliberately burned to support grouse shooting and around 40% of the land burned is in areas of deep peat. This damage is in addition to damage caused by the other activities associated with hunting from sheep grazing (which attract the government subsidies required to offset the losses involved in running grouse shooting with the average Scottish driven grouse moor generating only 67p for every £1 spent on it and the average moor making an annual loss of about £18 per hectare of land used for shooting – coincidently, the average upland sheep farm makes a profit of about £18/ha after subsidies) and the road-building and other infrastructure required to manage the hunts. In short, Scotland’s peatland is often deliberately mismanaged and risks being a contributor rather than a solution to the climate emergency.

So enters the new industry of “land management”. Something that we ourselves have promoted as a revitaliser of Scottish rural economies, it is possible that we could spent time and money investing in repairing the damage to degraded peatland and help to expand it and other carbon sinks like forestry to other areas. The impact on Scotland could be astounding  – the complete transformation of hillsides currently stripped bare of everything bar heather and grouse and the return of Scotland’s temperate rainforests and the thriving ecologies within. However, we have also called for it to be done with and not to local communities and this is where the Scottish Government’s policy gets things badly wrong.

As revealed by the NYT article, the current policy on peat restoration is to encourage the private owners of Scotland’s vast estates to restore damaged peatland and to reimburse them of 80% of the costs of doing so. Aside from Scotland’s notoriously unequal pattern of land ownership, the scandal – the latest in a series of scandals involving Scottish land – lies is in what happens next. The owner can use the fact that they have restored this peatland to sell carbon credits either on the basis of new carbon that will get locked into the ground or by simply claiming that the moors will no longer emit their stored carbon. These credits are bought by polluting companies which allows them to “offset” their own emissions and claim that they are “carbon neutral”. The land owner gets to keep 100% of the profits of the credit sale, despite paying only 20% of the costs towards the restoration. The article describes this as the Scottish Government saying “Bill us for the digging, and keep all the gold you can mine.”

These carbon credits are becoming increasingly lucrative and governments see them as a quick fix way of promoting a transition to a Net Zero economy and companies have seen this as a particularly lucrative way of extracting profits from Scottish land while greenwashing their own portfolios. Thus has been sparked a quiet land war in Scotland with some of the wealthiest people and companies bidding up the price of Scottish land to get in on the action. The big problem is that no-one seems to know how much these carbon credits will actually be worth in the long term and if land prices exceed what can be extracted from that land in credits, a speculative bubble begins to form.

The result of the rampant price increases goes beyond the economic damage that such bubbles will almost inevitably inflict on everyone except those involved in the speculation when they burst – it is having real impacts on communities who want to do the right thing by their environment but can’t because they can’t control the land under their feet. Worse, even when they try, they are forced to “compete” in this irrational game and pay exorbitant “market rates” for the land. Last year, national news celebrated the largest community buyout in Scotland with the purchase of Langholm Moor and Tarras Valley from the Duke of Buccleuch for £3.8 million. This week, we learn that the same community is struggling to raise £2.2 million to expand that purchase and they are under a deadline by the estate to lest they instead turn to the open market for a buyer. Even if successful, that means that around £6 million of money sourced from the community, charities, the public purse and other sources must be effectively given to an already wealthy estate. Multiply that across every other community in Scotland that is being priced out of control over the land they live on and we see why land reform is so badly needed if we want the climate transition to be a real Green New Deal and not just a “Net Zero” marketing stunt.

Common Weal is committed to campaigning for the kind of radical land reform that Scotland deserves and is entirely capable of enacting right now, with the powers of devolution. We have shown that all of the tools – with the notable but not particularly game-ending power over inheritance tax – are already fully or substantially devolved. Scotland could, for example, enact powers over maximum land holdings by a single individual, could ban the owning of Scottish land by non-domiciled companies and could enact a Property Tax that ensures that Scottish estates are properly taxed. Given this story we should also reconsider Scottish policies to do with the subsidies that these restoration projects receive – instead of blanket subsidies, the Government should purchase equity stakes in the land so that a share of the profits from the restoration can be recaptured to pay for further transitions. And communities absolutely must be protected from the rampant inequality of land speculation and should not be forced to compete in a market that is anything but “free”. Scotland has the power to enact compulsory sale and purchase orders when the need arises and these purchases need not be at “market” rates, though they should be “fair”. That “fair” price could include factors such as how much it will cost the community to restore damage caused by the current owner. It could well involve a calculation of how much the owner’s ancestors paid for that land (if anything) and how much profit the estate has extracted from the community over the centuries.

The Scottish Government must recognise that the Green transition – as vital as it is – is not just about the destination called “Net Zero” but about the world we create in the process of getting there. We could simply pay polluters to take up “green jobs” instead and salve away their contribution to the creation of the climate emergency and end up in a world where nothing much else has changed or we can use this last chance to rebuild the communities harmed by that hypercapitalist world and create something that all of us can be proud to live in. Not just “Net Zero”, but an actual Green New Deal.