First up, my apologies for going a little dark on the blog recently. Last month, I promised my thoughts on Scotland’s currency options going into the next independence campaign. That promise has turned into something a little bit larger than expected and will be coming soon. I think you’ll like it.

In the meantime, I’ve been pondering on some possible options regarding how we could reform Scotland’s welfare system, especially in the light that the UK has been explicitly called out by the United Nations for breaching human rights obligations due to the suffering caused by Austerity, inequality and the unfair and miserly welfare system in which too many find themselves trapped. The use of sanctions has been singled out as particularly cruel with countless cases of hardship and even deaths being directly linked to their use.

Both the Greens and Common Weal have been steadfast supporters of the policy of Citizen’s Income (or Universal Basic Income), a policy which is rapidly gaining traction around the world and is starting to look as if its time has come.

Under this policy the entire welfare system – with all its inequalities, complicated means-tested targeting, exceptions, exemptions, loopholes, paperwork, cheats, dodges, admin errors, fraudsters, bureaucracy and people simply missing out entirely because they don’t know they’re owed money or do but don’t, can’t or won’t claim – is done away with and replaced with a simple, regular payment to every citizen. You can’t claim money you’re not owed (except possibly by claiming for a dead relative or for kids you don’t have) and you can’t be missing out on money you don’t think you’re due. By the way, unclaimed money in the UK welfare system outweighs fraudulently claimed money by more than a factor of 10 and is dwarfed by tax avoidance by up to a factor of 100! 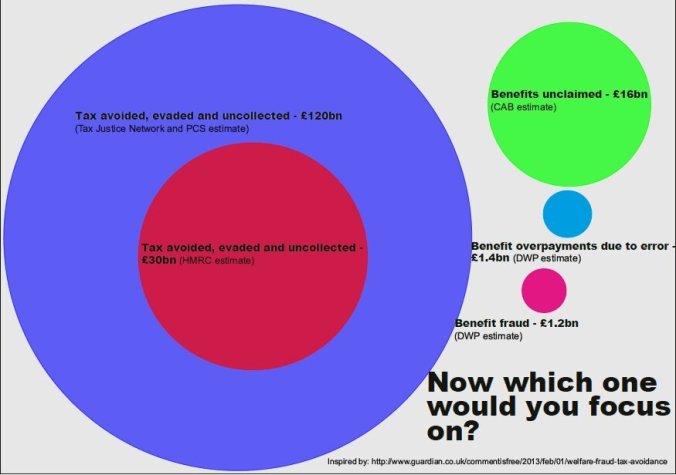 A Universal Basic Income also gives everyone a stake in the system and a guaranteed safety net if and when it is needed (in much the same way that the NHS is open and free at the point of use even if you can afford private care).

One of the downsides of Basic Income is that it does involve a large amount of money transfers. If we wanted to give all 5.3 million citizens of Scotland a Basic Income of, say, £73.10 per week (~£3,800 per year, the same as the current Jobseekers Allowance) then it would involve a monetary transfer of £20.1 billion per year which is only a couple of billion less than the entire social protection program for Scotland (which, of course, pays out a rather larger sum than £73.10 per week to many people such as pensioners and those with disabilities). Now, of course, this doesn’t imply that Basic Income would cost £20 billion per year. The idea would be that some threshold income would be set above which the income would be taxed back off you until the costs balanced and then onwards till you were a net contributor and helped to fund others (or, as an alternate POV, you were paying into the system to cover yourself for the times when you needed to withdraw). Regardless, the scale of the monetary transfers may be a significant bureaucratic barrier but so is the current piece-meal system that it would be replacing.

I fully support Citizen’s Income as a policy for an independent Scotland but we can’t do it now as we don’t have powers over welfare. I’m not keen on putting grand plans on hold till that day though so I’ve been giving thought to how Scotland could achieve a similar goal of a universal safety net using powers that we have right now. We don’t have power over welfare but do, finally and after great trials and tribulations, have powers over most of income tax.

This led me to thinking about a project advocated in 1968 by the economist Milton Friedman. The Negative Income Tax.

In this scheme Scotland could set an income threshold, say £16,500 – the equivalent of a full time job on the Living Wage. If you earn less than that in a year, the difference between what you earn and the threshold could be taxed at NEGATIVE 23%. If you only earned, say, £10,000. You would receive as a stipend 23% of £6,500 which is £1,495. If you earned nothing in the year, you’d receive 23% of £16,500 which is around £3,800 – The same as the current Jobseekers Allowance. The tax rate of -23% was chosen specifically to create that latter situation. One could easily imagine different rates or even a progressive system to cover people who fall seriously below the threshold proportionately more than those who only fall slightly under.

This system wouldn’t be a perfect substitution for Citizen’s Income for a few reasons. Most significantly, it is a lot easier to abuse or cheat the system by under-reporting one’s income, for example. If rates and thresholds are set inappropriately it may also lead to disincentives to work at around the threshold where someone converts from a recipient to a contributor though in the simple scheme proposed here this is less of an issue.

Negative income tax does have an advantage over Citizen’s Income by reducing the volume of monetary transfer though as only those who are earning below the threshold receive the stipend rather than everyone.

So how much would this cost? To find out, I’ve done some modelling using available income statistics, in particular the breakdown of income percentiles for the UK (percentile resolution income data for Scotland doesn’t seem to be easily available. If anyone out there knows of someone who does have it then please contact me, I’d be very interested in seeing it) .

One shocking thing about the UK is that the threshold we set, of £16,500 per year (which is, remember, the amount that said to be required to maintain a decent standard of living) is not reached until the 32nd percentile. Almost one in three workers in the UK are not earning enough to live on.

If we now add our negative income tax to this model to see how much a median person within each percentile would receive it looks something like the following.

Something to bear in mind it this income percentile data only includes people who have at least some kind of earned income. It does not include the unemployed or those who are unable to or are not seeking work, the “economically inactive”. The ONS estimates that these two groups together make up around 21.6% of the UK working age population. If we factor that group into the figures modeled here (and assuming that Scotland’s figures are roughly in line with the UK’s which will be good enough for this back-of-envelope calculation) we can estimate that the negative income tax would cost Scotland around £2.4 billion per year.

This is where things get a little tricky for the policy idea. The obvious answer to meet the costs is by adjusting the upper rates of income tax to render the scheme revenue neutral. The problem is that the UK (and Scotland) are predominantly low wage, high inequality countries. We’ve already stated that if you’re on the absolute basic wage you’re already earning more than almost a third of other workers (and this doesn’t include those earning nothing). If you pay the 40% Higher Rate, you’re in at least the 86th percentile – the top 15% of earners – and if you pay the 45% Additional Rate (assuming you are even taking those earnings as “income” and aren’t transferring money into dividends or using more arcane accounting wizardry to minimise one’s tax bill) then you are in at the very least the top 2% of earners. This doesn’t leave a very large tax base from which to levy the required funds (This was one of the reasons that the policy advocated by the Greens for the return of the 50% rate was based on reasons of income and wealth equality rather than revenue raising and did not make any spending predictions or promises based on additional revenue from this band).

If one DID want to raise income taxes to find the £2.4bn then doing it solely through the Additional Rate simply would not be possible. Even raising it to 95% (and assuming that everyone pays it) would only cover half of that bill. In order to do it with the Higher Rate, both Higher and Additional Rates would need to be raised to a minimum of 58%.

Now, a normal, independent country would not face this problem because it would be able to tailor the other half of the balance sheet as well. If a negative income tax is replacing welfare spending then the welfare budget would decrease and the balance sheet would..well..balance. But in Scotland’s case, welfare is reserved so what becomes a simple exercise in government policy which would pay for itself and hugely benefit the poorest in our society becomes a constitutional question and a financial bung of £2.4 billion per year to Westminster. Whilst we have the “powers” to adjust our tax rates, Scotland just simply does not have the ability to use them in any kind of effective manner. Those who demand that “we use the powers we have” whilst blocking the levers which would otherwise allow us to do so should reflect on their actions and words. I’m thinking particularly of our Secretary of State “for” Scotland, the “Right Honourable” David Mundell who, as we remember, has not only taunted the Scottish Government towards “using our powers” but has also threatened to tax any welfare top-ups the Scottish Government might be willing to grant. I hold no great hope of Westminster’s generosity extending to them returning saved welfare money in order to pay for a negative income tax.

I’m open to suggestions at this point. If anyone can square this circle, please…please tell me. I think I’ve found a policy which, on paper, would be within Scotland’s current powers to implement but I can’t find a way to make it work within the pitiful financial constraints of our devolution. I don’t want to have to “wait till indy” to get some of this vital work started nor am I content knowing that people could be helped but cannot be because of Westminster’s refusal to either do it or to hand over the reigns to someone who will.

This shouldn’t be such a difficult process. Only in Scotland, within the United Kingdom, in the 21st century, where we’re told we’re incapable of governing ourselves, whilst those who say that they can govern stand by and either do nothing or actively work against us, does it become one.

9 thoughts on “We Need To Talk About: A Negative Income Tax”