So the PM deigned Scotland with her presence today. A full media fanfare edition of her “Strong and Stable Tour” ahead of her snap General Election in June.

I noted especially Sky News’ coverage in the morning which described May’s evident “confidence” in feeling able to come to Scotland given our country’s typical attitude towards the Conservatives.

So how did Confident May present herself to the voters of Scotland?

Did she fill the Hydro with adoring crowds and glitter cannons?

Or perhaps held a smaller conference where her policies could be scrutinised and debated?

Maybe she visited to a major city and went for a walk out among the people?

Heck. Maybe she even, as I did this morning, just set up at a little stall somewhere approachably public?

Nope. None of these. Confident May. Strong and Stable May came, spoke quickly and left as quietly as she could. To a small village hall 17 kilometers outside Aberdeen with only a couple of party activists for company. 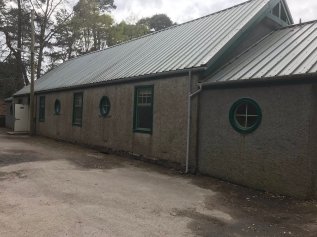 Given that this was all done in secrecy, even to the point of lying on the hall’s booking form, only a couple of members of the public managed to get there in time to see her arrive.

She came. She spoke. She left again. No chance for voters to ask her about her policies or challenge her on her ideas. No chance for her to see what those policies are doing to Scotland and the people who live here. No chance of her ever governing for us. Only at us.

Just by way of comparison, I’ll share the basic format for the talks and presentations I’ve been giving across Scotland in recent months to do with the White Paper Project. Typically, I’ll be invited to speak on a particular topic* within the Project. Currency, GERS, Debt and Assets, Demographics. That kind of thing.

I usually aim for about 20-30 minutes on the topic at hand and then we quickly get on to the fun bit. An hour or two of completely open, unvetted and unrestricted questions from the audience about absolutely anything they like. I’ve always enjoyed this, even more than giving the talk itself, because it keeps me on my toes and allows me to see which arguments are convincing and which can be improved. Which need simplified and which can go into more depth. And, most importantly, which arguments are of interest to the audience. We probe our policies. Test them. And we debate them.

But because you never know who’s going to turn up to these talks and don’t know what they’re going to ask about, you need real confidence to be able to stand there and answer them (especially if that answer turns out to be “I don’t know”).

*Side Note:- If you’re a Yes, Common Weal, pro-indy party or other activist group and you’re looking for a speaker, feel free to give me a shout here.

Confidence isn’t turning up to a hall of your own activists then hiding again. That’s not strength. And it won’t make for a stable government either. Believe me Ms May, when you go to the EU with your Brexit demands you WILL be asked questions and they will NOT be content with the same soundbite shouted at them over and over.

And the same will (or, at least, should if their media hosts hope to be worthy of their names) happen in the election leaders debates which I do hope that you will either turn up to or at least have the humility to not complain when they empty chair you.

Of course we all know why she chose to do it this way. She’ll have no doubt listened to BBC’s Any Questions yesterday when one of her most ardent Defenders of the (Tory) Faith, Adam Tomkins, had endure some scrutiny over the Rape Clause. He couldn’t do it in Parliament and he most certainly did not do well in public yesterday. And he’s one of the best speakers they have. I mean that.

So this is the confidence trick behind the Tories. They either know their policies are bankrupt or they are so far behind their own bubble that they genuinely can’t see it (I’m not sure which is worse), but thanks to a compliant media and the lack of any effective opposition they are getting away with it. Cobble together a couple of soundbites. Focus group them to sterility. Repeat them ad nauseum only in places where they can’t be challenged.

There are two elections coming up over the next month or so. Those who have noticed need to get challenging and force some scrutiny on this government. We simply can’t keep being ruled by fiat diktat. That never ends well.

6 thoughts on “The Confidence Trick”