That’s the council elections done then.

Well, that’s the voting done. The “fun” bit is going to happen over the next few days as the negotiations work out. Not one of the 32 councils in Scotland have a majority control with major Labour fiefdoms like Glasgow and North and South Lanarkshire all falling to that party’s continuing collapse. Not safe, though, were SNP councils like Dundee which has also slipped out of majority control. The rise of the Conservative and Unionists (who have been benefiting from the second half of their name even in spite of the first) has been remarkable even if all they’ve been doing is cannibalising the other Unionist parties rather than making any substantial gains on the other side of the constitutional divide.

The Greens had a good time of the elections, increasing their seats from 14 to 19. Incidentally, we’re now the largest party on Orkney Council (albeit because all the other councilors are independents). My own branch of South Lanarkshire failed to get any candidates elected although I have to give my personal thanks to the 139 people who placed their trust in me with their 1st preference votes. It was a great experience being a candidate. Who knows. It may not be my last time.

As it stands now, South Lanarkshire will be represented by 27 SNP councilors, 21 Labour, 14 Conservatives, 1 Lib Dem and 1 Independent. With 33 required for a majority there will now be a weekend of intense negotiations over who goes where. Whilst they’ve lost their control, Labour will now be the kingmakers here. It will be their choice whether they side with a party with whom they share many or most of their values when it comes to local issues or whether they’ll side with a party with whom they share precisely one value over which their councilors will have precisely zero ability to effect.

This will be the story going on in many more councils across Scotland and I cannot predict how they’ll turn out, only that if Labour does decide to ally itself with the Tories one more time for one more stint at short term gain then their final death as a party is inevitable. They will have thrown away their last reason to exist in Scottish politics. And they wouldn’t be missed by many, not even their “allies”, once that happens. 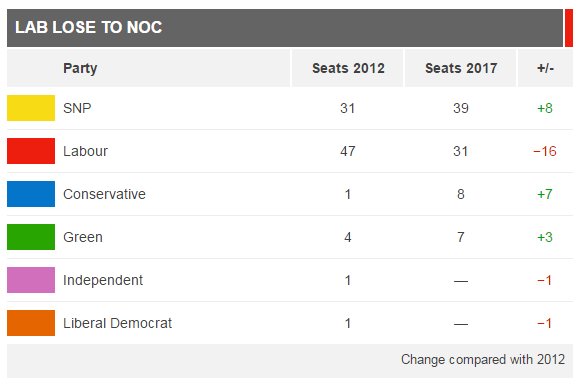 Glasgow will be an interesting story in this regard. With the tally there being 39 SNP, 31 Labour, 8 Conservative and 7 Greens and with 43 needed for a majority there is no possibility of a Labour/Tory Alliance conspiring to keep control of this city. Instead it seems inevitable that the SNP will be the part of control here, it just remains to be seen if they’ll form a formal or informal coalition with Labour or with the Greens to get there. Obviously I’d certainly be hoping for the latter but, as with all in politics, I guess it’ll depend on the price asked by all sides involved. No matter what, Glasgow is ripe for exciting possibilities for change. Too many areas of the city have been neglected for too long and there are great opportunities and assets there just waiting for someone to have the courage to take on the challenge of exploring them. I’d personally like to see something like the Community Buyout scheme recently promoted by Common Weal given a shot. You can read about that here.

Just as a final addendum to my STV voting system guide I can now show you how that all played out in my own ward of Clydesdale South.

5,541 ballots were received, of which 5,452 were valid. This means that a total of 89 ballots were rejected for various reasons (mostly due to people placing 2 or more crosses in the boxes instead of numbers). At only 1.6% of the ballots cast, this isn’t a hugely concerning number but still, we’ll need to do better in future to explain to people how to vote.

With three candidates to be elected, the Quota for this ward was 1,364. No candidate reached the Quota on the first round of voting so the candidate with the lowest number of votes – UKIP’s Janice MacKay with 65- was eliminated and their votes transferred Mostly, these went to the Conservative candidate although I received 9 and the SNP candidates received a few each. Voting strategy can be rather…individual at times…

At the end of this round, still no candidate reached the Quota so the next lowest candidate – The Lib Dem’s Kaitey Blair – was eliminated and her 101 votes transferred (I and the Conservative candidate were the greatest benefactors of this transfer though the remainder were split evenly).

Still no-one reached the Quota so Round 4 saw my elimination and the 174 votes which had been allocated to me at this point were transferred – largely to the SNP though also to Labour. At this point, the number of non-transferable votes – caused by people not filling out their full ballot paper – starts to become noticeable.

Round 5 and STILL no-one has reached Quota so away went Independent candidate Danny Meikle. Meikle was a former Labour man and it shows in his support with more than half of his votes transferring to Labour candidates and another quarter dropping out completely.

Round 6 and Quota still hasn’t been reached so the least popular of the two SNP candidates – Sandra Mills – was eliminated. Unsurprisingly, almost all of her votes transfered to her co-candidate Mark Horsham and this is enough to ensure his election.

Round 7 and Horsham’s votes are redistributed according to the over-quota rules and here we see comparatively few votes actually transfer. This is a combination of many of those SNP supporters either filling out only SNP 1,2 or placing myself in 3. I know for a fact that I picked up a lot of 3rd preference votes but as I had been eliminated by the time they were eligible for transfer, they never actually made it to me.

This redistribution isn’t sufficient to push anyone else over the line so Labour’s Gordon Muir was eliminated and his votes distributed mostly to the remaining Labour candidate George Greenshields. These transfers were enough to push both Greenshields and the Tory candidate Colin McGavigan over the quota line (although McGavigan would have been elected as final remaining member even if he hadn’t made the quota) which leaves the final results as 1 SNP, 1 Labour and 1 Conservative.

So, that’s the council elections done. I’ll certainly be watching how things develop over the coming months and years. Oh…and there’s the little thing about another General Election in a month’s time. Enjoy!

5 thoughts on “Council17 – The Aftermath”