Exciting news tonight as Scotland has now formally banned fracking. Not for us, the sight of mazes of pads burning their way across the landscape as has happened in the USA and elsewhere.

The vote went through the Parliament this evening with 90 votes for to 27 votes against. The SNP, Greens, Labour and Lib Dems all backing the ban as did lone Tory Oliver Mundell.

Further to the ban, the group also voted to accept amendments by the Greens, Labour and Lib Dems which supported a focus on further development of renewables and called for powers over licensing to be immediately devolved to the Scottish Parliament.

Critically, the Green and Labour amendments have ensured that the ban has been significantly strengthened from its previous form. 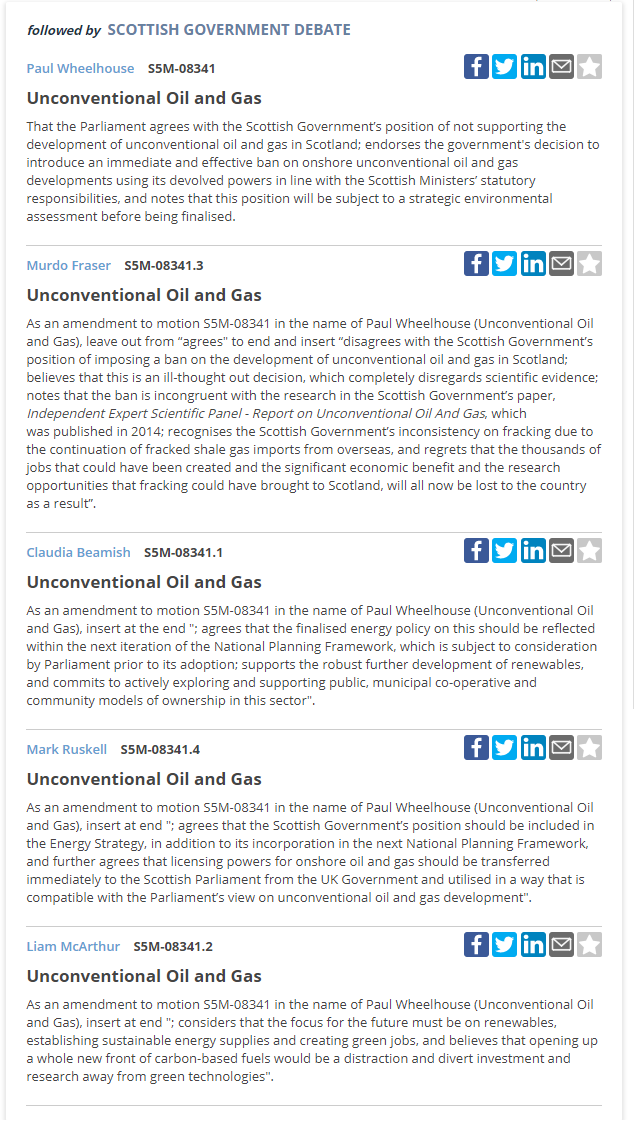 Prior to these amendments, the ban was relatively weak. All it would have taken to overturn would have been the Energy Minister either changing his mind or being changed for another Energy Minister and for the decision to simply be reversed.

Now, in a democracy no party can bind its successor and no decision can ever be truly permanent. Even if Scotland had a constitution which contained a fracking ban it would still be possible to strike it down by, for example, 2/3rds majority vote in Parliament and a referendum.

As it is, this amendment ensures at least a modicum of oversight. It’ll now require at least a vote in Parliament to remove the fracking ban from the National Planning Framework thus the ban is now at least as strong as the one which has prevented new nuclear plants for a decade without serious challenge.

There are still those who would wish to see Scotland fracked. Those who simply don’t understand or don’t want to understand that our climate change commitments preclude us from extracting and burning all of the hydrocarbons that we’re already currently tapping – never mind those we haven’t found yet. Those who simply will not accept the critical danger that our climate is already in.

I was particularly struck by Ineos’s response to the initial announcement of the ban in which they said that it would turn fracked gas in Scotland into a cost instead of a source of income.

To that, I’ll say fair enough. The thing is; costs can be minimised. Reduced. Eliminated. Alternatives can be found or we can find alternative – better – ways of doing things.

The age of the fossil fuel is guttering to its end whether Ineos likes it or not. They, and others like them, can begin adapting to the post-fossil fuel world or they can stand aside and let others take their place in that future.

A future that Scotland is already helping to create.

The debate in Parliament can now be watched below.

One thought on “Fracking Offed”