“Leadership is about vision and responsibility, not power.” – Seth Berkley

This has been an unusual election, put upon us by unusual times. The pressures of the global Covid pandemic here in Scotland have greatly limited electoral campaigning (though I do believe there’s a bright future ahead for digital and semi-digital hustings and other meetings) and the count itself has been extended to allow for the safety of the staff involved. The grand tradition of watching over-tired politicians and pundits trying to say nothing for as long as possible between 10pm and the first results coming in was pretty much absent in Scotland this year. Normally, around this time, I’d be reporting on the results and my analysis of them but as things stand we’re not expecting the first Constituency results in Scotland until this evening and as the Regional results can only be tallied once all of the Constituency results are in, we’re not expecting the final results until Saturday night or maybe even Sunday morning.

Instead of that analysis (which shall come when we have the results) I want to write an open letter to all of the politicians who will take up seats in the upcoming Parliament.

To Those We Are About To Elect

Congratulations on your election victory. You may be a first time politician, a returning MSP who has spent time elsewhere, a long time Holyrood veteran or even one of the last few of the “99’ers” who have been with us continuously for the whole of the Devolution Era (who will be the very last of you, I wonder?). You may be a member of a party that aligns with my own personal politics. You may be a politician fighting against your party to bring them closer to your own personal goals. You may be a flagbearer for a party utterly anathema to my own objectives. None of this matters when it comes to your role in Parliament. At the very core of the responsibility of a politician is a single promise that should be reflected upon every day that you are in office.

“I am here to make tomorrow better than it is today.”

This should be true of any politician, of any party, of any ideology, of any time. The moment it ceases to be true for you, or the moment you find yourself making excuses for why it shouldn’t have to be true right now or that you are an exception to this promise, it may be time to consider giving up your role to someone else.

It is easy to scoff at this promise when thinking about one’s political opponents. There’s a very human trait that involves overhumanising your allies (celebrating their successes as innate heroisms and their failures as external mistakes forced upon them by others) while dehumanising your opponents (decrying their failures as innate evils and their successes as accidental coincidences bravely won by campaigners against the odds). Always remember that they probably think you’re just as misguided for believing something as you think they are for not believing it. 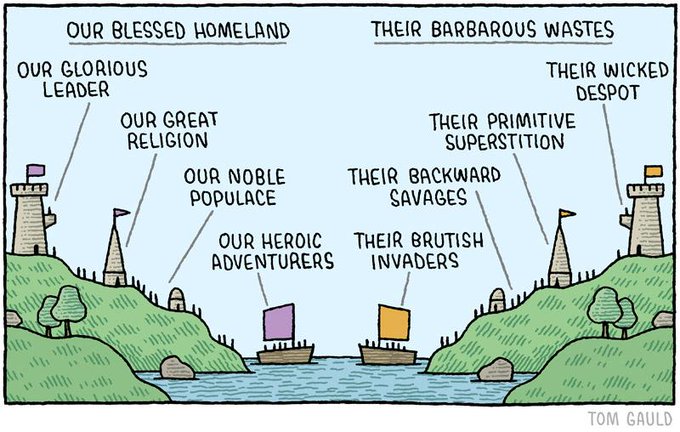 But the core promise should still ring true. The difference lies not in the promise itself but in both the definition of “better” and in the reasoning for why tomorrow isn’t already better than today. It also means considering who you want to make things better for.

I sit unashamedly on the Environmental/Progressive-Left side of politics. For me, the grand sweep of history has been one of gradual improvement in many aspects of life – from basic health and poverty, through technology and societal equality. Yes, there have been punctuations and reversals. Crises and lost campaigns have slowed or even turned back that progress – but only temporarily and always with the hope of recovering and improving further. The “who for” is, as you may expect of me by now, “All of Us”. I truly believe in Common Weal’s mission statement that a society is only as successful as its most vulnerable member and thus anyone “left behind” is to the detriment of us all.

And for all the despair that it is easy to slip into at the state of the world and the mountainous responsibility facing us in the form of the climate emergency I do believe that just as things are better today than they were yesterday, they can be made better tomorrow than they are today.

It’s harder for me to write down the Conservative-Right version of this promise without underhumanising my political opponents. I’m going to try but if anyone on that side of politics would like to give me their version as they see it from within, I would greatly appreciate it.

In this view, change itself is not an inherent improvement. It should not be undertaken just for the sake of change itself. Societies are built upon their values, their traditions and their history and if changes are made that erode them then society as a whole loses something vital. Sometimes it’s a price worth paying but change in itself it may not make things “better”. Indeed, if recent changes have caused us to lose some value then restoring it is imperative. Today is not necessarily better than yesterday but tomorrow could be if we can arrest the decline and return to those better days.

“Who for”, especially within liberal-conservatives, is often “for me” but not always in quite the selfish, power-hungry way that might sound coming from a politician. What it should mean is that everyone should have the opportunity to make their own better tomorrow and that not only will no-one stand in their way of getting it, no-one will be there to save them should they fail or should they decide not to try. There’s “Freedom” in that…so long as the opportunity truly is there and that no-one has pulled the last ladder up behind them.

(From Adam Smith’s The Wealth of Nations)

Only for the political Centrist do I fail to see the core promise working for them. Again, at the risk of dehumanising and with the invitation for correction from anyone within that sphere, I would suggest that Centrism is built upon a foundation of “everything today is fine and should be maintained so that tomorrow is the same”.

It’s a wonderful goal. In a perfect Utopia, nothing should be changed because, by definition, any change from Utopia would be less good than what came before.

But in any world where voters can see problems for themselves (whether they be problems held universally or seen only through the lens of their political stance) then promising no change and simply managing the present is not a path to long term support. Any gains to be made by promising to “do no harm” to mild opponents are inevitably lost by losing one’s core allies who want tomorrow to be better and then by losing those opponents too.

There is a term for this. “Pasokification“. The decline of European centrist parties – beginning in the early 2000s but accelerated since the 2008 Financial Crisis – has as much to do with a lack of vision and a story to tell about the response to crisis as it does the failed responses themselves. People are built on stories. We need them to knit together the fabric of our lives.

When you take up your seats, think less about the policies that you’ve promised and how you’re going to deliver them but instead think about how they interact and how they create a tapestry of the better tomorrow. This is something I’ve always tried to do in all of my policy work. It’s one thing to talk about “better housing“, “public owned energy” or “effective investment banking” and it is perfectly possible to argue each of these disparate policies on their own merits – but how much stronger is it to tell a story about investing in both clean energy AND efficient housing to create a society where no-one needs to worry about their fuel bills or the quality of the air around them?

People are often quick to decry “division” in politics but politics is the art of managing division, not a suppression of it. We should revel in the various stories we tell about the societies we want to create then use the tools of our democracy to determine who gets to enact which story or stories. You should be bold and tell the story you want to tell, not the one you think your opponents will complain about the least.

One observation I’ve made in my career in this strange world of politics is that governments tend to not be the best they can be but drift towards being only one vote better than their opposition. Anything less results in electoral defeat but anything more can be seen as “wasted effort” especially when the opposing parties themselves seem as though they have little intention to try to beat you. This is a tendency that must be resisted by both the government and the parties that oppose them. If I agree with your story of a better tomorrow I’ll support you. If I disagree with that story, I’ll oppose you. But in either case, if it’s the best story that you can muster, I’ll celebrate you (so long as it’s also backed up by the best policies you can create too).

We’ll find out over the next couple of days what the next five years of Scottish politics will look like. Whether it is a majority government, minority, formal coalition or anything else we must remember that beneath the parties and the promises there are people and the stories they tell. As you take your seat next week please remember that promise to make tomorrow better than it is today. Please don’t be content with a wrong that you could right but can find an excuse not to. Please meet and exceed the promises that you were elected upon. And listen closely to the stories that others in politics are telling about their better world too – for in them you might find lessons about your own.

6 thoughts on “To Those We Are About To Elect”