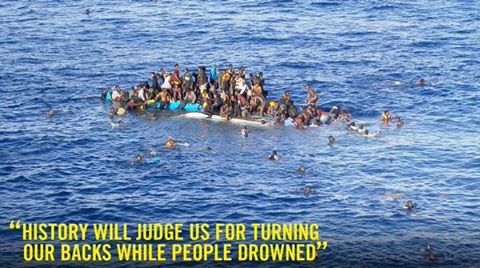 On the 15th April, 1912 a ship sank in the Atlantic. Of the 2224 crew and passengers, many of them migrants searching for a better life, over 1500 died when the Titanic went down.

As of the 20th of April, 2015 an estimated 1500 migrants searching for a better life have drowned in the Mediterranean this year.

The former humanitarian disaster etched itself onto our collective psyche. Inspired books, folk songs, films, exhibits, and memorials and resulted in changes in international law to ensure that it never happened again.

History will judge us most harshly if we turn our backs on this one.

“We have streets named after slave owners. We profited from a vile crime and feel no shame. We fear the arrival of immigrants that we have drawn here with the wealth we stole from them. For much of the rest of the world we must be the focus of bitter amusement, characters in a satire we don’t understand. It is British people that don’t learn languages, or British history. Britain is the true scrounger, the true criminal.”

3 thoughts on “Just a Few Words on the Ongoing Crisis in the Mediterranean.”