“Austerity should not be a death sentence. Every person should be able to retire with the benefits they’ve earned and dignity they deserve.” – Fuad Alakbarov

Last week, while everyone else was watching a septuagenarian finally start the job he was born to do, some stats were released by the ONS that revealed that he is not alone in the “grey workforce”. An increasing number of older people in the UK are entering, re-entering or remaining within the workforce. It paints a picture of the older workforce that reveals underlying weaknesses and vulnerabilities in the UK economy.

Around 10% of over-65s in the UK are in employment. This is roughly double the percentage who were working in 2001. Around 1.5 million people in the UK aged over 65 are working.

Now, this might be considered a “good thing”. A sign of rising life expectancies and a shaking off of, as PM Liz Truss once put it, the “lack of skill and application” amongst the British workforce. Life expectancy has indeed been rising over the past few decades. Between 2000-2002 and 2018-2000 (the stats are smoothed by a three year moving average), average remaining life expectancy in Britain for someone already aged 65 increased by about 31 months for males and 21 months for females. If you’re aged 65 just now, on average you can expect to live for another 17.5 years if you’re male or 19.8 years if you’re female. However, if the hypothesis is that people are working longer because they’re living longer – that, in effect, 82 is the new 80 – then we’d expect to see employment and life expectancy rise more-or-less together. We see some of this. Four fifths of the life expectancy gains since 2000 happened between 2000 and 2010. Life expectancy increases slowed almost to a stop since then and have even started to reduce as Conservative Austerity took hold and started killing people. 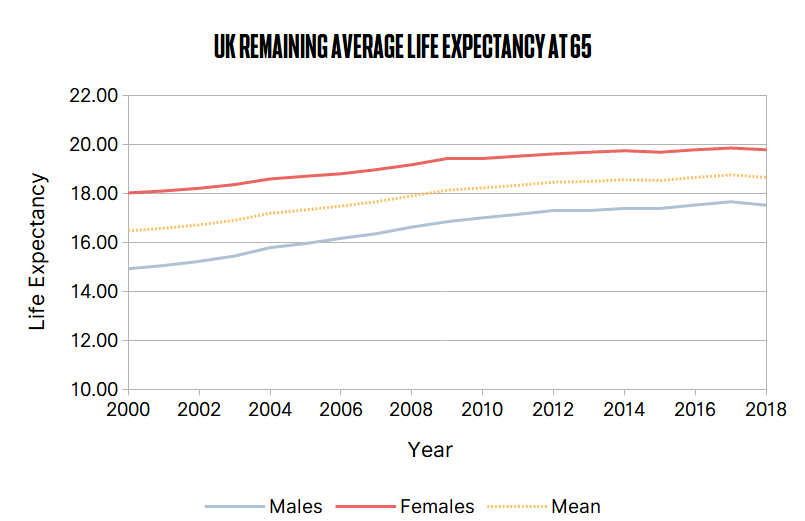 The increase in employment amongst older workers follows a roughly similar pattern of increasing from about 2001 up till 2015 before levelling off. It even started to decrease again until Covid hit and then we enter a period of high volatility amongst the older workforce. The present “record breaking” employment figures are part of a major spike that has seen older employment not just recover to pre-Covid levels but has seen it shoot past it into uncharted heights. What we don’t really see is a substantial increase in employment in the period when WASPI women saw their retirement age increase from 60 to 65 between 2016 and 2018 – employment was dropping during the first half of this period and increasing in the second. We don’t have any data about the split in employment between males and females across this period so it’s not possible to say, for example, that a rise in female employment was being counteracted by a fall in male employment.

The latest ONS data for this year looks at the recent employment spike in more detail. We can say that the spike is not being driven by an increase in full time employment – such workers actually decreased by about 4,000 over the course of this year. Instead, we’re seeing a large increase in the number of part-time employed workers (up by 85,000 – so evidently this rise itself is not being driven by older employed workers reducing hours) and by older workers becoming self-employed either full time (up almost 7,000) or part time (up by 76,000).

I think the rise in self-employment in older people is the key point of concern here. It’s a sign that people are not being supported in employment but still have the need or desire to work. Given the economic strains we’re in, I think the former is more likely and older people are facing the prospect of losing their jobs, not being able to find new employment because of Ageist hiring practices and being forced by rising retirement ages, reducing social security and cost-of-living stresses to try to find extra income by any means necessary. In times of economic stress, “self-employment” increases because people simply need to do anything they can to earn money.

My book with Bill Johnston (All of Our Futures, available in the Common Weal Shop) did encourage Scotland to cultivate an environment where older people could work for longer. We want to see people retire when they are ready to and want to – which for some might be earlier and others later than any arbitrary age set by a Pensions Secretary. We want people to avoid a “cliff edge” whereby they go from “productive worker” one day to “resource draining pensioner” the next. We want to see people phase down their hours of work and to have their work and workplace adapt to changing needs that come with age.

What we don’t want to see is older people losing their job as businesses shuttered through the pandemic, being unable to find a new one but also being unable to afford to live without one or perhaps worse, someone who has reached retirement age discovering that the rising costs of living and continued suppression of the UK’s inadequate and meagre pension system (see Chapter 5 of All of Our Futures for a detailed look at how an independent Scotland could reform the pension system or here for a briefer summary). As we move into a new Winter of Discontent we may discover that the UK’s new price controls on energy prove inadequate and we may find that older people in Britain become increasingly forced into a job market that is ill-prepared to accept them (see Chapter 6 of All of Our Futures or my summary here). Add in the prospect of a recession as folk in Britain cut back on all spending other than absolute essentials such as rent and heating and we could see the jobs that older workers (and younger workers) might rely on simply disappear from the economy.

PM Liz Truss has stated her intention to embark on a grand experiment to repeat Thatcherism across Britain (something that the FT has pointed out won’t work because Thatcher already did it and no-one since reversed the damage). If she does then we can expect the pain to fall, again, on those least able to bear it. With little in the way of an alternative economic vision coming from other UK political parties it falls to Scotland and the prospect of independence to give us a chance to build a country that ensures that older people (and the rest of us!) are able to work if we want, to work as effectively as we can but, crucially, where none of us are forced to work past the point we want to or our bodies physically and mentally allow. I don’t want to live in a country increasing desperate to scrape the last gram (or ounce) of “productivity” out of me before casting me to the wayside. I want to live in a country that values me as a person and my future as something that I live in.

If you want to read more about how Scotland can reform to become a country that we can be proud to grow older in then please consider buying our book All of Our Futures in the Common Weal shop.